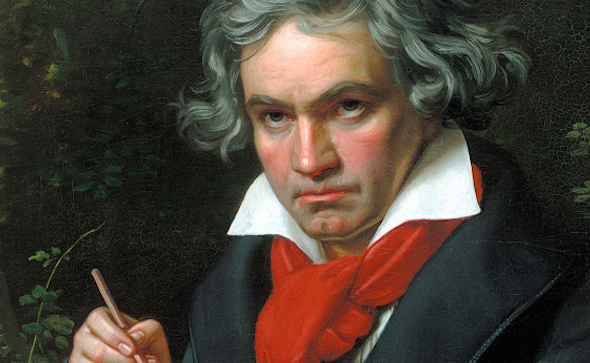 December 16, music fans, and you know what that means: Beethovenʼs birthday (also Chanukah, but that's a non-musical story.) There are a number of ways to celebrate, particularly if you have big speakers in your apartment and annoying neighbors upstairs. But possibly more fun than that would be to head over to the “creativity salon” The Emerald Tablet (80 Fresno St., San Francisco, near Columbus and Grant in North Beach) at 7 p.m to hear the musicians of Classical Revolution play chamber music by Beethoven.

This is CRʼs eighth anniversary (and Beethoven's 244th, although he's slowed down recently) and the organization, which brings young, professional musicians into unusual venues to play classical concerts, is going from strength to strength. In San Francisco, musicians have performed in more than 800 music events in more than 90 different Bay Area venues.

They have a faithful following every Monday at Revolution Café, but theyʼve also gone international — If you happen to be in Paris, France tonight, you can hear musicians of the local Paris chapter of CR at L'Olympic Café, 20 Rue Léon.

Other, more local places you can hear CR musicians: every second Tuesday at Café Trieste in Berkeley and every first Wednesday of the month at Awaken Café in Oakland.

Tonight, the group will be playing Beethovenʼs Septet Op. 20, several string quartets, and sonatas from the masterʼs extraordinary output.