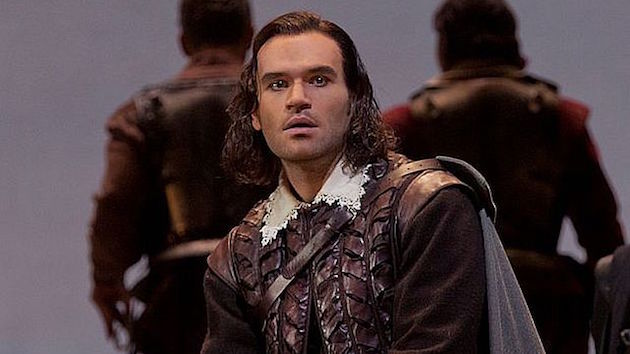 When Michael Fabiano made his 2011 San Francisco Opera debut in Donizetti’s Lucrezia Borgia at age 27, the tenor already had cut a wide swath in the music world. As he returns June 12–29 to perform the title role of Verdi‘s Don Carlo for the first time, his career has gone far further still, as evidenced by his receipt of both the Richard Tucker and Beverly Sills awards and by his appearance on the cover of this month’s Opera News.

The internationally famous tenor has been very busy, both with music and with the many causes he supports. He arrived here on Monday for rehearsals from Mauritius and a United Nations International Arbitration Conference, where he sang at a gala headed by Secretary General Ban Ki-moon. That came after performances in Paris (Rigoletto in Opéra Bastille), London (Onegin at Covent Garden), and Zürich (La Bohème, Opernhaus Zürich).

After May in San Francisco, Fabiano is heading to Madrid (I due Foscari, Teatro Real), Napa (opera gala at Festival Napa Valley), Houston (Faust, Houston Grand Opera), Washington (Hèrodiade, Washington Concert Opera), and the Met as Rodolfo in La Bohème and Alfredo in La Traviata.

With all this travel, it may come handy that he recently earned a private pilot’s license, an achievement typical of Fabiano’s driven talent. Even with his intense focus on opera, he has wide-ranging interests in many subjects, many of which are reflected in his blog. One such passion is bringing music into as many lives as possible. "I love to support children and young adults find music,” he says. “I work hard to get into schools and speak to cultural issues. Last year I visited the James Lick Middle School and gave a great session, for instance. I use Skype and Google hang out to do similar initiatives."

Another significant interests is health. Fabiano — trim and fit — has managed to overcome near-obesity for more than a decade, and he has been using his own successful diet-and-exercise regimen to help others: “I lived for a very long time severely overweight and know the significant difficulties that many face to first accept the challenge to change their own lifestyles in order to have a new body and image and then, act on it in earnest.” He has published several fitness and health essays.

While not quite up to Pavarotti’s 12-hour sleeping requirement, Fabiano says he has to have eight or nine hours of sleep every day he sings, and “I hydrate — drink maybe two gallons of water, vocalize two or three hours before the performance.” Most singers are hard workers, but Fabiano is among the fanatical ones. 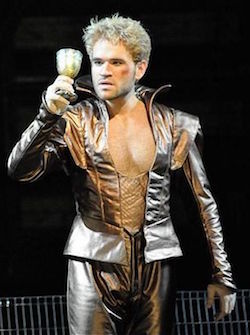 Susan Froemke’s documentary about the 2007 Metropolitan Opera National Council Auditions captured Fabiano going to battle with nothing held back, which created his reputation as a tough fighter, who says “competitions are not for the faint of heart,” and that’s one characterization no one has applied to the tenor. “I am the CEO of my business,” he has said. When asked if he sees any difference in himself today compared with his audition years, he says, “Time is a great agent for maturity.” Secure, self-confident, considered brash by some, Fabiano has said his “nerves really don’t manifest on stage — I really eat up the stage ... it makes me feel great.”

Brian Kellow’s characterization of Fabiano in Opera News neatly sums up the singer and the man:

No one reignites that golden-age magic the way Michael Fabiano does. There’s his magnificent, warm tone, the generous helping of squillo, and his visceral stage presence. His energy is so concentrated that he often leaves his colleagues miles behind. There’s also the thrilling inevitability of the way he sings, reminiscent of the young Luciano Pavarotti. His reviews are excellent. So why does he make so many people uneasy?

With his focus clearly on the Verdi opera, Fabiano has been studying Don Carlo for more than two years in advance of the San Francisco debut, hoping for future engagements in the role. Except for the character’s romantic misfortunes, Fabiano embodies Don Carlo’s oomph, drawing his sword fearlessly against king (and father), court, Church, and Inquisition

Correction: When the story was originally posted, the caption for the top photo incorrectly identified Fabian as playing Othello. Fabiano played Cassio in that production.