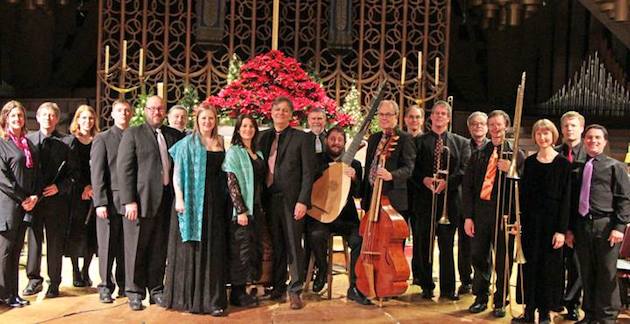 Most music lovers know the name of Francesco Cavalli as a brilliant composer of Venetian opera. A contemporary of the long-lived Claudio Monteverdi, Cavalli's works for the public opera houses have enjoyed a limited revival in the past few decades, particularly the brilliant La Calisto.

But Cavalli's day job was as an organist at St. Mark's Cathedral in Venice, where he was appointed to the choir in 1615, the year after Monteverdi came to town as the cathedral's music chief. He eventually rose to the post of maestro di capella in 1668. And in those roles, he composed a great deal of sacred music, some of which is on the bill for Magnificat's first concert of the season. Music Director Warren Stewart chose a concerted mass from Cavalli's enormous 1656 publication of sacred music, because its “solemn grandeur [is] well suited to the celebration of the Holy Nativity.” And given that it was likely composed to commemorate a peace treaty, it's not a bad choice to celebrate one of history's famous peacemakers.

As was common in 17th-century Venice, Cavalli's sacred style in this mass is not sharply delineated from his operatic style, which is a good thing for us. The music of the mass, according to Stewart, blends in musical innovations from the opera house.

As always, Magnificat draws its ensemble from some of the best local, early-music specialists, so this concert is something to mark on your calendars as one of the last big music events before the holiday break.