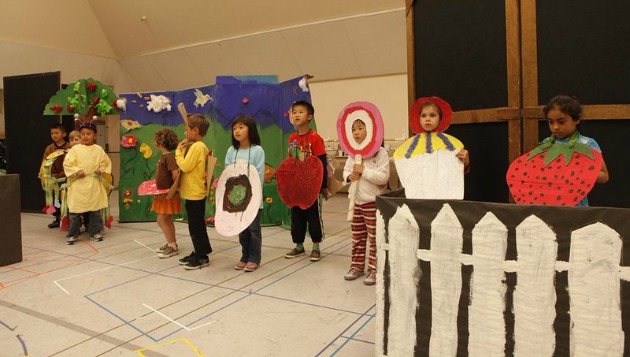 One of the city’s important annual cultural events for children and families comes up on Saturday, April 30: the ARIA Festival, to be held at the Veteran’s Building in downtown San Francisco. It’s a daylong, free community open house where kindergarten through 12th-grade students, from schools all over the city, perform in various arts.

“One of the wonderful things about opera,” Ruth Nott told us — she’s the San Francisco Opera’s Director of Education — “is that it draws people in for so many reasons: the visual designs, the costumes, the story, the music, the dancing. It’s an art form that can appeal to everyone and to not have access to that would be such a shame.”

Nott has seen the positive effects again and again over the last six years, not least the way some young adults take charge and show a sense of leadership. One story comes to mind. Recently, the opera held its first ever Spring Break for Teens program, which grew out of a partnership with American Conservatory Theater, SFJazz, and the San Francisco Ballet.  Thirty students took part, including a 16-year-old named Armand, from Visitation Valley.  He goes to Downtown High School in the Portrero District and has gradually become attracted to theater class.

In the program, students were asked to choose a second artistic form — inasmuch as that’s in the nature of Opera. He chose dance and had an enlightening experience. As Nott put it, “He had never performed in front of other people, never danced before in his life, but felt this was a completely safe environment in which he was not being judged, unlike at school. The point here is to encourage the idea of collaboration and Armand completely excelled.

At one point, he rallied all the students together in a circle and talked about how significant this experience was to him. “Coming into this week I was tired, I was stressed,” he began. “I’m pretty sure we were all tired. But I can safely say I have found something special in every single one of you. And, even though I hope to, I may not see any of you guys ever again. Shed a tear. But I hope one day that we can look back on this and make this a very fond memory for everybody.”

Performances and workshops will be held at the Wilsey Center’s Taube Atrium Theater, Bryan Education Studio, the Braby San Francisco Opera Archive and other locations on the fourth floor of the Veteran’s Building.

The 30th annual SFUSD Arts Festival begins April 28 to May 6 and commemorates student creativity in visual, literary, media and performing arts. The Asian Art Museum, located at 200 Larkin Street in the Civic Center, will serve as the hub for this celebration. For more information about the SFUSD Arts Festival: sfusdartsfestival.org