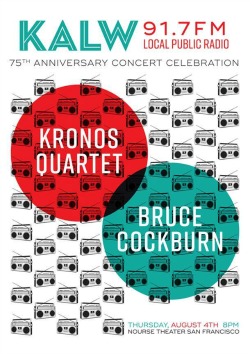 Through good times and bad, KALW has pinned its identity to the image of a scrappy little alternative FM station, the “local public radio” that could. In fact, the station has seen grown significantly in the last 15 years, and its resilience is marked by its 75th anniversary.

And so a party is in order.

The station (91.7) will offer a concert this Thursday night, August 4, at the Nourse Theater in San Francisco, at 8 p.m. The Kronos Quartet will play along with Bruce Cockburn. For more information: http://kalw.org/post/kalws-75th-anniversary-concert#stream/0

KALW is a National Public Radio affiliate and the oldest FM station west of the Mississippi. It was launched at the world’s fair on Treasure Island in 1939 by then owner General Electric, which donated the title to the San Francisco Unified School District in September 1941 — making KALW the first educational FM station on the West Coast.  The station’s transmitter is on Twin Peaks in San Francisco.

“Our message is this,” says Matt Martin, the station’s general manager. “This is a creative enterprise that’s done some important things in this community. People should pay attention. Not least because we’ve been a real advocate for local arts.”

Among the station’s relationships: the Berkeley Symphony, SF Performances, and the Jewish Community Center of San Francisco.