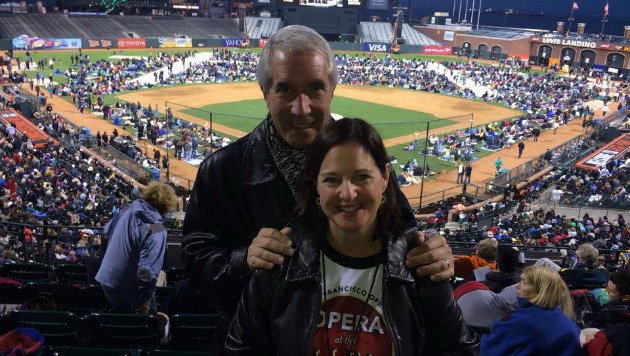 In March we reported on the nomination. Thirty-three names — of both living and dead — were submitted for the category of “Program host.” Votes were submitted both by the public and by the Broadcast Legends Group, which has 220 members. Nominees were allowed to campaign for themselves.

Nicolini has been the midday announcer on KDFC since 1997; Hoyt Smith, the morning announcer since 1999.

“We’re a great team,” Nicolini told us, and added, “I see so many names in the hall that I used to listen to growing up in Oakland. It’s just such a thrill and of course it’s great to have the classical music format put in the spotlight.”

Induction will be held on September 23, at the Broadcast Legends Fall luncheon. Other winners include: for News. Wes “Scoop” Nisker who worked at KSAN in the late 1960s into the ‘70s, and then, in the ‘80s and ‘90s, at KFOG. For Sports, Kevin “The Rat” Radich, the sports anchor at KCBS. Before, that he was at KNBR and KGO.

KDFC tends to hold audiences longer in the evening compared to other stations and is in the top four classical music broadcasters nationally. The top classical station in the country is KDFC’s sister station, KUSC in Los Angeles, followed by stations in New York and Washington D.C. KDFC, for the last five years a public station owned by the University of Southern California, has close to 25,000 members.