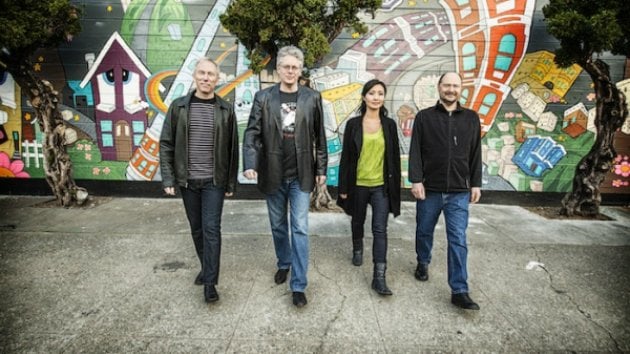 Music and measuring sciences go together in classical music. The association stretches all the way back to ancient Greece, set down by Plato in what a 12th or 13th -century scholar would have called the quadrivium: arithmetic, geometry, astronomy, and music. The measurement of harmonic intervals from the simple ratios to the more complex, which we now call the harmonic series, was related to astronomy in the concept of musica universalis or “music of the spheres,” sounds that were assumed to emanate from moving celestial bodies, which also were thought to influence life on earth.

With such a long history, you could view the computer-generated score for a solar eclipse as either a contemporary marvel or a return to the oldest basics of the European/West Asian paradigm of music. But San Francisco’s Exploratorium and its resident sound artist and composer, Wayne Grim, probably just hope you’ll think it’s cool.

Grim has imagined a composition that arises out of the total solar eclipse occurring on August 21, and it involves a live performance by the Kronos Quartet. The music, or “soundscape”, is titled 233rd Day and will be created by processing digital information collected from an array of telescopes; computer algorithms then translate the information into an auditory experience. At the Exploratorium, the composition will accompany a live feed of images from telescopes in Caspar Wyoming. As the live feed switches from one telescope to another, the data changes and the music responds, creating a dynamic element to the “sonification” of the eclipse.

The show begins at 9:15 a.m. on August 21 and the Kronos Quartet join the mix at 10:30, just before the event reaches its climax, and play for a half hour, until just after the total eclipse. The Kronos provide an extra dynamic element, playing along with the sounds generated by the algorithms.

And just to make things a little more dense, Grim will also include sounds generated from algorithms based on the movement of the planets visible during the dark sky of the totality. So, yes, we’re going full-on music of the spheres here. The modern version is called asteroseismology, a process by which astronomers measure oscillations in light reaching the earth from celestial bodies and convert that data into sound.

Considering all the technology involved  —  multiple telescopes, satellite uplinks, complex computer programs  —  it’s a shame the piece can only be performed once. But for Grim it will be worth it. “I’m elated to have a chance to collaborate with the stars on this piece,” he says. “I’ve been a fan of Kronos Quartet since I first heard Black Angels, and I’ve been a fan of the sun for literally as long as I’ve been alive.”