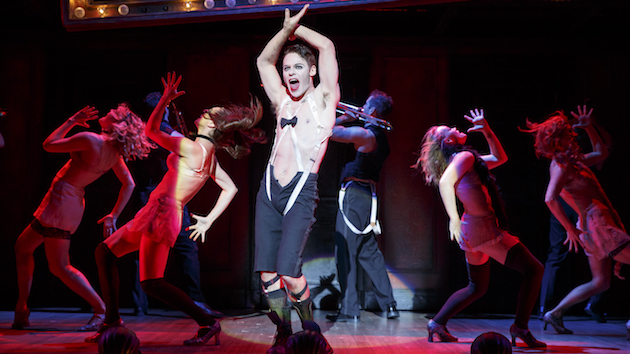 Unlike the usual difference between a Broadway cast and the actors of the touring company, the cast of the John Kander/Fred Ebb Cabaret coming to the Golden Gate Theater, June 21 – July 17, is almost identical to the New York revival production audiences there have seen and critics acclaimed.

As part of the Roundabout Theater Company’s 50th-anniversary season in New York, two big names in theater and film, Sam Mendes and Rob Marshall, teamed up to produce a revival of the 1966 musical. Except for some adjustment for the venue, this will be the Roundabout Cabaret.

In addition to Randy Harrison as Emcee and Andrea Goss as Sally Bowles, almost all the Broadway Kit Kat Girls and Boys and other actors will be onstage at the Golden Gate Theater. Called quadruple threats, these actor-singer-dancers also play instruments. They are the show-within-a-show that is Cabaret.

So what is it like to join this illustrious group for the San Francisco performances? There are two local additions to the Kit Kats: Alison Ewing from Mill Valley (she is also understudy for Sally Bowles) and Steven Wenslawski from Clayton in Contra Costa.

Wenslawski may be a newcomer to Cabaret, but he is a veteran of national tours and regional theater, a musician, playing piano since age 4, as well as a stage performer and dancer. He meets Cabaret’s demanding requirements well, and plays such band instruments as clarinet and saxophone. He auditioned several times, until he made it:

When they were casting the tour, I began practicing again and got the show this time around. Although I don’t consider myself the best on the reed instruments, I tried to demonstrate my level of overall musicianship at each audition and callback. Once we were in rehearsals, I was added on keys for one number, and assigned to cover another number on the accordion. Playing piano was a very minor part of my audition process, but I had had other opportunities to demonstrate my playing for our music supervisor. The singing/acting/dancing portions of the auditions were pretty par for the course.

Wenslawski says growing up in the Bay Area helped him succeed because he was able to surround himself with “opportunities for participating in community arts,” in school, church functions, community theaters in Contra Costa, Diablo Valley, Pittsburg, and elsewhere.

His theater experience led him to dance, and he took up ballet, eventually joining the Houston Ballet Academy and later the Oregon Ballet Theater. After an injury, he turned his interest and experience to working as an accompanist for ballet classes in New York at Juilliard and other schools.

All this and more adds up to a part in Cabaret, playing musical instruments in addition to singing, dancing, and acting:

The biggest challenge is maintaining your skill level in each area. If I only have so much time in the day, do I run through my Bach pieces to maintain piano technique or do I practice that sax solo that I cover? Or work on the certain clarinet bits that are still challenging me. There are only so many hours in the day, while also maintaining my health and fitness on a touring lifestyle.

Wenslawski’s daily routine is now that of the cast — preparing for the show by putting on costume and makeup, tuning and warming up on instruments, participation in the preshow contact with the audience, stretching, and then performing.

This is among the busier seasons in the combined 38-year history of SHN/Best of Broadway, with Cabaret just one of 13 shows. Busy, but still not up to the record set in past years when they presented 20 productions. 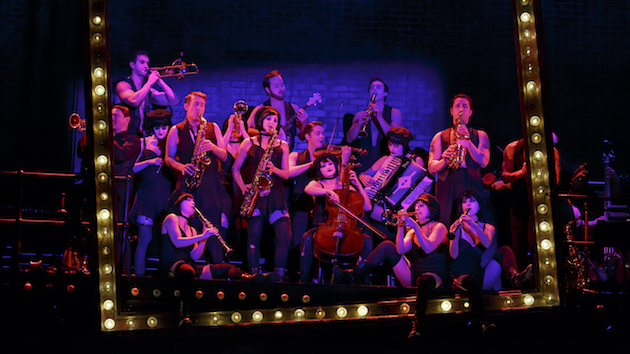