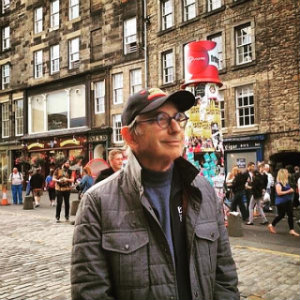 Led by Michael Tilson Thomas, the San Francisco Symphony started its big European tour on Thursday and Friday, performing at the Edinburgh Festival. After concerts at London's BBC Proms on Sunday and Monday (see below), the orchestra is moving on to Wiesbaden on Thursday and Berlin on Friday. Next week: two concerts in Bucharest, two at the Lucerne Festival, with still a week to go after that.

Rave reviews are already in, such as that of the second Edinburgh concert from The Scotsman:

After 20 years at the helm of the San Francisco Symphony, Michael Tilson Thomas commands his players like the long-standing captain of a great ocean liner.

A palpable sense of mutual respect informed every one of Friday’s performances in a programme that opened with the crackpot sound world of Charles Ives’s Decoration Day, continued with the more even territory of Beethoven’s Piano Concerto No 4, before blowing us away with an emotionally exhaustive, rich-grained interpretation of Tchaikovsky’s Fifth Symphony. 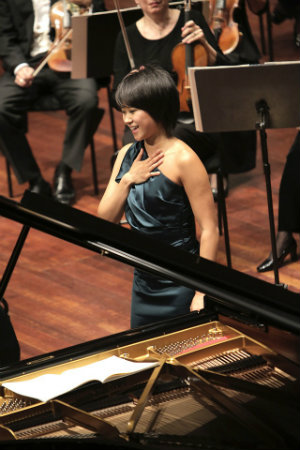 The acclaimed soloist for the Beethoven (on on Monday, for the Bartók Piano Concerto No. 2) was Yuja Wang, at 28, an S.F. Symphony veteran. In San Francisco the week before tour, PBS NewsHour filmed a segment about Yuja’s unique relationship with MTT and the SFS, with whom she first debuted in 2006 and has performed every year since.

Thanks to BBC-3, the San Franciscans' concerts in Albert Hall could be heard live, but if you missed them, recordings will remain available to stream for a month longer. The Sunday Schoenberg-Cowell half of the concert is here; Mahler's Symphony No. 1 here.

Also on BBC-3: an intermission feature about the S.F. Symphony with principal trombonist Timothy Higgins, and former S.F. Symphony director of artistic planning John Mangum, identified as "covering" the position until it's filled. Mangum currently is president and artistic director of the Philharmonic Society of Orange County.

For the Monday concert - Ives, Bartók, Beethoven - the recording of the performance is here. For all other events, see the BBC program guide.

One of favorite stories of tour so far is a familial one. A substitute in our cello section on this tour is Mariko Wyrick. Not only is she a fabulous player and a former principal cellist of the S.F. Symphony Youth Orchestra, she is also the daughter of Symphony musicians Peter Wyrick and Amy Hiraga. Peter and Amy couldn’t be more proud to share this musical journey with their youngest daughter. 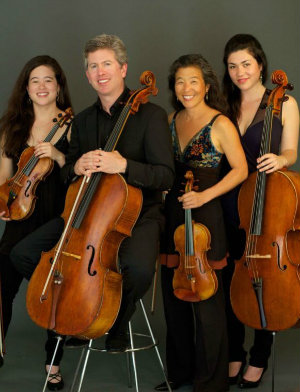 And, another rave about S.F. Symphony, this is from The Guardian:

But it was Mahler’s First Symphony that really showcased the rapport this conductor and orchestra have built up during Tilson Thomas’s 20 years as music director. The melodic lines tumbled out in one long, easy flow, the violins sounding sweet, the trumpets very prominent from their position above the rest, but still part of the blend. There was no grandeur, no posturing in Tilson Thomas’s interpretation, unless you count a slight underlining of the radiant final climax; the second movement had an unforced boisterousness, and the funeral march of the third dissolved into a series of tender, half-remembered songs. No west coast brashness here, just a golden, late-summer, Californian glow.