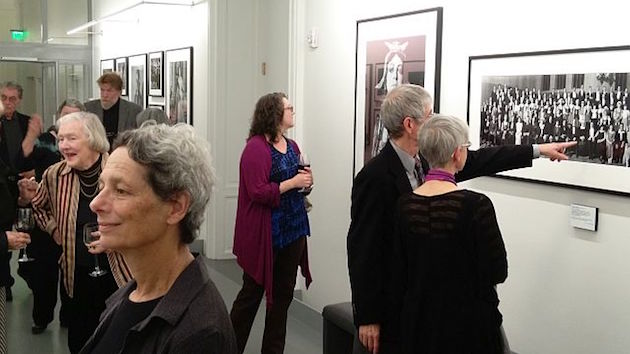 For decades, San Francisco Opera patrons enjoyed viewing photos of great singers on the walls of the Opera House basement. Now that experience has been raised to the fourth floor of the Veterans Building and to the nth degree in quantity and quality.

Opening last Tuesday, August 30, “Looking Through the Lens: The Glory of San Francisco Opera” offers 135 archival photos from the company’s 94-year history. The images line the walls of corridors in the new Diane B. Wilsey Center for Opera, a space that once provided galleries for the San Francisco Museum of Modern Art.

As organized by SFO Communications Director Jon Finck, in collaboration with Archives Associate Ann Farris and a group of 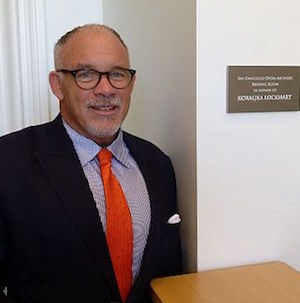 company members and volunteers, the exhibit is divided into black-and-white photos in the south hallway, called the David Gockley Gallery in honor of the company’s Emeritus General Director, and color photos in the north hallway, named after the donor Hume Family.

Finck said the project started in 2010 at the instigation of Music Director Nicola Luisotti: “Nicola arrived on my doorstep and with great Italian, theatrical sweep was standing before me, saying that we must do something about hallways in the Opera House because, ‘this is a great theater and we must make it look like a theater every day when we come to work.’” 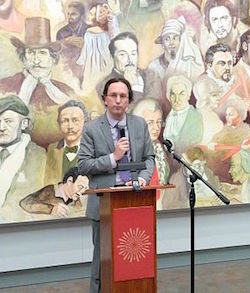 Both Gockley and his successor, Matthew Shilvock, attended the opening ceremony, and spoke enthusiastically about the importance of archives in keeping the company‘s extraordinary legacy alive. S.F.

A memorable large photo on exhibit is the gift of the S.F. Symphony Archives, a recently discovered image of the entire company, including chorus, supernumeraries, and orchestra (which served both Symphony and Opera before the 1980 opening of Davies Hall), before the performance of Andrea Chénier at the 1923 inaugural season in the Civic Auditorium. (The 12th production of the Giordano opera opens the 2016–2017 season on Sept. 9.) 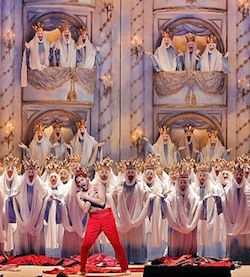 “We determined that the first gallery would be a collection solely devoted to the company’s earliest decades from 1923 to the mid-’60s and it would be all black and white,” Finck said. “With a hearty and enthusiastic band of volunteers, dusty and partially crushed boxes and old filing cabinets creaked open to reveal photos, old negatives ... We all felt like archaeologists scouring the past and trying to sort through the collection. We realized we were sitting on a magnificent visual narrative about San Francisco Opera.”

Indeed the opera “archaeologists” found, researched, and exhibited numerous photos never seen in public before. An initially puzzling image of Leontyne Price from Don Giovanni, posing with an apple, turned out to be the soprano caught with her lunch, said Finck. He named some of his favorites:

The big Epilogue from Mefistofele with the chorus of angels and a shirtless Ildar Abdrazakov; the never before released image of Nina Stemme, from Siegfried, and the previously unpublished image of Nadja Michael getting her “sexy-on” as Salome in the “Dance of the Seven Veils.”

And a bit of trivia I discovered while working on photos of the “Three Tenors” — Pavarotti, Domingo and Carreras — all three made their San Francisco Opera debuts within a few years of each other and all in the same role as Rodolfo from La Boheme. Who knew? 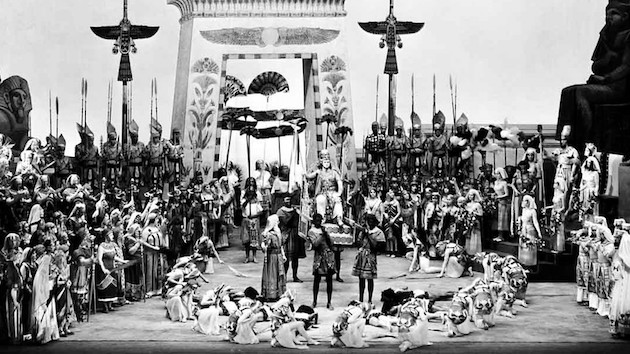