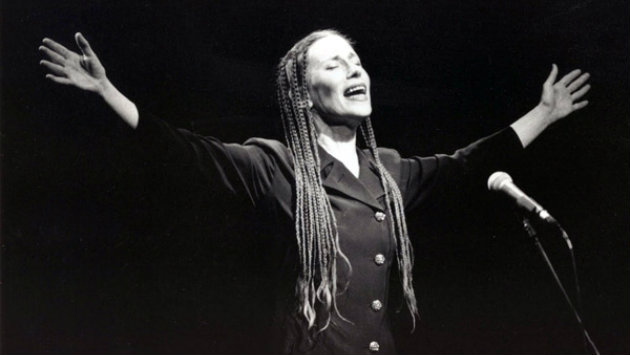 Meredith Monk, along with 10 others, on Sept. 10 received a National Medal of the Arts award — given for “outstanding contributions to the excellence, growth, support and availability of the arts in the United States.”

Monk, 73, is a composer, performer, director, vocalist, filmmaker, and choreographer. She is regarded as a pioneer in the development of “extended vocal technique” and interdisciplinary performance.

Monk has described three periods in her creative life.  The first began in 1964, when she arrived in New York City after graduating from Sarah Lawrence College, and lasted until 1976 as she worked largely as a soloist with a “keyboard of some kind.”  In the next period, which lasted through the early 2000s, she set out to explore vocal textures and formed a six-member ensemble that continues to tour. Her third period began with Michael Tilson Thomas, who convinced her to write an orchestra piece. This was a dramatic turn for an artist who has always regarded herself primarily as a “vocal composer”.

She has said she is “distrustful of narrative” and “Words are pointy.” Moreover, “The language of the voice doesn’t need another language on top of it.”

Her mother, Audrey Lois Monk, was a professional singer and herself the daughter of professional musicians — the Russian Jewish bass-baritone Joseph B. Zellman, and Rose (Kornicker) Zellman, a concert pianist of German Jewish background. Meredith was born in Lima Peru and describes herself as "Inca Jewish".  She grew up in New York City and Stamford, Connecticut. Her favorite music includes work by the Brazilian Caetano Veloso, music by Mildred Bailey, and Bartók's cycle for piano Mikrokosmos.

Among her accolades, Monk has received a MacArthur “Genius” Award, two Guggenheim Fellowships, three “Obies,” and two “Bessie” awards for Sustained Creative Achievement. She holds honorary Doctor of Arts degrees from Bard College, the University of the Arts, The Juilliard School, the San Francisco Art Institute and the Boston Conservatory.