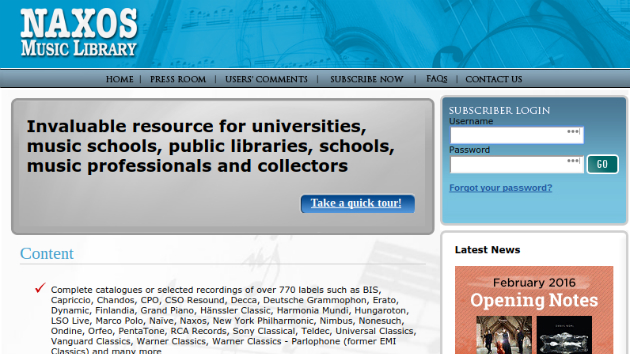 Klaus Heymann, the founder of Naxos Recording, has been telling anyone who will listen for more than two decades that his plans were to move the company way beyond what a traditional label does. First, the company moved into distribution, signing up literally hundreds of smaller labels. Later, it was at the forefront of digital distribution, successfully launching its own streaming service all the way back in the 1990s.

And now, in February 2016 it has opened up the Naxos Music Library World, a collection drawn from nearly 70 years of releases, from field recordings in Appalachia to intimate glimpses into Asian court music, to songs from the Bambuti of the Ituri Rainforest. Music comes from more than 150 countries and 1,500 cultural groups. And that includes classical, jazz, and other “mainstream” genres.

Naxos is especially known for its world music collection with nearly 60,000 tracks; new albums are added weekly. In addition, the collection contains more than 5,000 albums from such labels as Smithsonian Folkways, ARC, Warner, Sony, Naxos World, plus other smaller independent labels. Subscribers can search the NML World by country, cultural group, and other criteria.  Every track, album and playlist has a static URL, which means that they can be brought up singly or in groups, making your search response more exact.

For classical recording aficionados the most important feature in the new service goes by the unexciting name of metadata. Naxos employs three dozen musicologists who work the metadata, information which can be used to cross search and, for example, find multiple recordings of the same work, view everything on a single label’s roster, and access the booklet for a recording.

“At Naxos,” says Nick D'Angiolillo. director of Licensing and Library Service, “musicologically informed humans are figuring out what’s jazz, what’s classical, what’s pop or world, not machines, which is a large distinguisher from the rest of the industry…. We put labels at the forefront of the service, in a different way to organize compared to other streaming services, which are artist driven.”