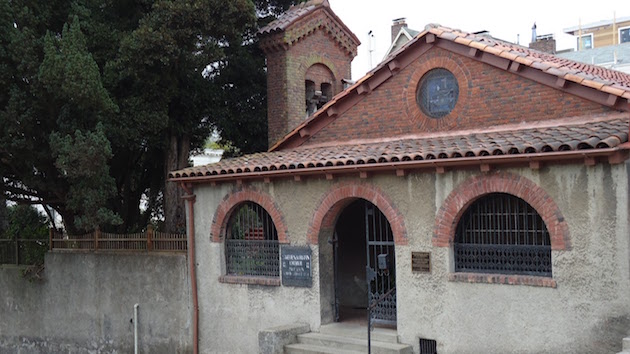 Emanuel Swedenborg was the 18th-century rationalist who believed in angels. At 53, he had a series of spiritual encounters that led to his most famous work, Heaven and Hell.  He described angels this way, “… in their form, angels are completely human. They have faces, eyes, ears, chests, arms, hands, and feet. They see each other, hear each other, and talk to each other. In short, they lack nothing that belongs to humans, except that they are not clothed with a material body.”

Moreover, said Swedenborg, angels in heaven live in houses, may be married, and are kept relentlessly busy serving the Lord. Swedenborg was a scientist and an inventor — he drew diagrams of “an airship” — as well as a psychic and Christian mystic. He strongly influenced the Transcendentalists, notably Ralph Waldo Emerson.

And so a denomination was formed and in 1895 the Swedenborg Church of San Francisco opened its doors. It was the dream of Joseph Worcester, the church’s first pastor and a Harvard graduate who fell under the spell of that other transcendentalist, John Muir.

Among the church architects: Bernard Maybeck. The church, in Pacific Heights, which was made an Arts & Crafts Movement landmark in 2004, is a hidden treasure, with a small garden perfectly suited for reflection.

And now the church is sponsoring a new “Second Sundays” one-hour concert series that began on May 8 and runs through October 9. The series features music from the Middle Ages through the Baroque and Classical eras. 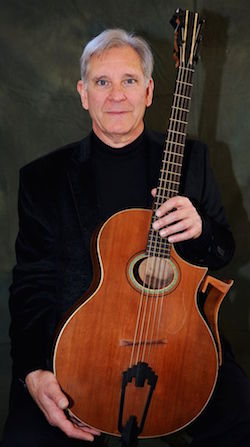 The next concert is on June 12. Jeffrey McFarland-Johnson will perform the Bach Cello Suite 1 — on an instrument he designed and commissioned. It’s called the guitello, a “fretted plectrum-generated instrument tuned as a ﬁve-string cello in ﬁfths.” Think of it as the hybrid of a steel string acoustic guitar, the cello, and the lute. The wood was taken from the planks of a cabernet wine vat at the Charles Krug winery in Napa Valley.

He will play the Cello Suite 3 on violoncello.

McFarland-Johnson studied with Arto Noras, a Tchaikovsky Competition winner. After teaching music for 22 years McFarland retired and has spent several years in an intensive study of the Bach cello suites. That lead to his design for the Guitello.

Concerts begin at 7:30 p.m. on the second Sunday of each month. Tickets are $20 each. The Church is located at 2107 Lyon Street in San Francisco, at the corner of Washington Street. Performance listings and descriptions are available at sfswedenborgian.org/concerts.