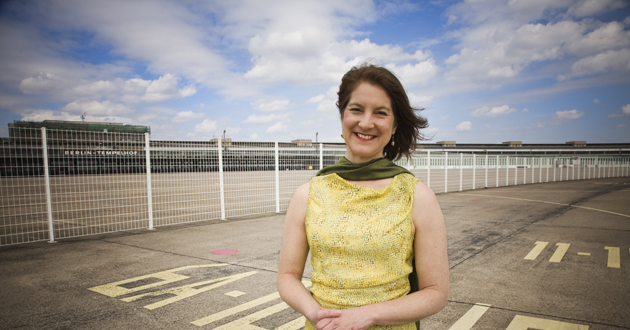 You have to move quickly and expansively to keep up with composer Lisa Bielawa’s visions. SFCV managed to grab a few precious minutes with her before she rushed off to a meeting with fellow directors of the San Francisco Girls Chorus, and to preparations for the performance of one of her compositions by the Paul Dresher Ensemble and Amy X Neuburg at Cal Performances.

The subject of our chat was a Bielawa work-in-progress, Vireo, scheduled to be taped by KCET, in Southern California, and to be broadcast over TV and internet as the pilot in a 14-episode “serial opera” extending across several centuries, two years of real production time, and a variety of artistic centers across the country. The title character of the new piece is a composite of other females with visions, whose “hysteria” has been the object of fascination, and sometimes exploitation, by society, throughout history, and the subject of a paper Bielawa wrote when she was a literature major at Yale.

Bielawa shared her research on visionary teenage girls with playwright Erik Ehn, who “basically created this libretto — sometimes dark, sometimes goofy — as a narrative about a young girl named Vireo.” The project was shelved until Bielawa secured funding in connection with her current residency at the Grand Central Art Center in Santa Ana, California. From that center, she auditioned singers at the Orange County School of the Arts (including 16-year-old soprano Rowen Sabala, who’ll portray Vireo) and at nearby Cal State Fullerton. A scheduled Orange County concert by the Kronos Quartet in February of 2015 secured that ensemble’s participation in the project, and KCET-TV signed on to tape the pilot, which will occur on February 23-24 at the historic Yost Theater. The cast will also include members of the San Francisco Girls Chorus (of which Bielawa is an alumna as well current artistic director) and several professional opera singers.

Regional performing and production teams will be similarly assembled at other locations, to be funded and announced after the pilot project. “I like to catalyze new relationships between artists and musicians, writing music and making communities,” says Bielawa. “So this is kind of the brass ring for me.”