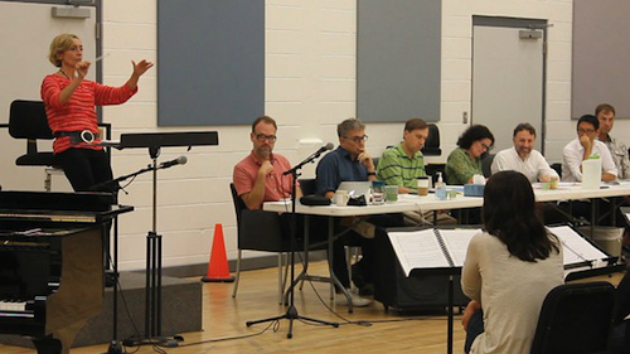 It hasn't taken long for Opera Parallele to make a major impact on the cultural life of the Bay Area. Artistic Director Nicole Paiement has brought contemporary opera to the forefront of cultural discussion through well-cast, dramatically visceral productions from the first foray, Lou Harrison's Young Caesar (1971), to February's triumphant Dead Man Walking. The company, which announced its 2015-16 season last Thursday, is big news.

At the center of the coming season is Terence Blanchard's Champion, libretto by Michael Cristofer, which premiered in June 2013 at Opera Theatre of St. Louis. It's been a long time since eyebrows would be raised at the idea of a jazz-based composer writing an “opera in jazz.” Still, Champion was one of the most intriguing operas of that year at least partly for its novelty value.

Paiement had conducted Blanchard's instrumental music at the Monterey Jazz Festival, and, she says, “I had always appreciated his musicianship, so I was curious about this piece. And so I wrote to Terence about doing a reorchestration of the piece for us and he said 'yes' right away.” She didn't know that Blanchard would be tapped to be SFJAZZ's resident artistic director. The two have just this past weekend performed Blanchard's A Tale of God's Will (Requiem for Katrina) with musicians from the OP orchestra at SFJAZZ's Miner Auditorium.

Champion is a story that deals with the struggle of boxer Emile Griffith in 1950s-60s America as he tries to deal with his bisexuality and the death of an opponent in the ring. It plays Feb. 19-28, 2016 at the SFJAZZ Center.

Peter Maxwell Davies' haunted and haunting The Lighthouse (1982) is also on the schedule. Paiement conducted it at the Dallas Opera several years ago. It was actually the first piece she conducted there. It qualifies as a modern classic, a work that Opera Parallele should excel in. The demanding, brooding score is perfect for the story of three lighthouse keepers in the remote Flannan Islands in 1900 who disappear in a mystery that is never solved. When I asked her how the score went down in Dallas, Paiement said, “It was a smashing success. People still meet me and say how much they loved The Lighthouse.” The Lighthouse plays at Z Space, April 29-May 1, 2016.

Repeating an experiment that was also a smashing success, Opera Parallele has again commissioned Chris Pratorius to write a children's opera that will be performed, fully staged, and costumed by elementary school children after an eight-week intensive, free, artist-in-residency program. The opera will be based on Mary Hoffman's children's book Amazing Grace, with libretto by Brian Staufenbiel and Roma Olvera. The production plays Nov.12-14, venue to be announced.