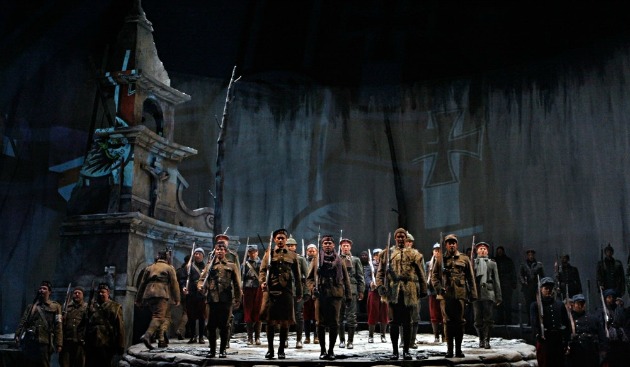 Opera San José will present four productions this coming season, which begins on September 10, 2016 and runs through the end of April, 2017.

Founded in 1984 by the late Irene Dalis, the company performs in the California Theatre, a lavishly restored landmark built in 1927 in downtown San José. The company is modeled after a German regional opera company and maintains a resident group of principal artists who come from all over the country to train for international careers.

“We are extremely proud to be producing the West Coast premiere of Kevin Puts’ and Mark Campbell’s Silent Night during the 2016-17 season,” says General Director Larry Hancock. “Even though this Pulitzer Prize-winning opera is set in muddy trenches, it is not a story of brutality, but rather an illustration of the goodness human beings are capable of, even under the most oppressive conditions.”

The opera is based on an event in 1914, in Belgium, when, in the week leading up the Christmas holiday, British and German soldiers spontaneously emerged from their positions to exchange food and souvenirs; play soccer; release prisoners, recover the dead, and sing carols. It was given its world premiere in 2011 at Minnesota Opera, with subsequent productions at  Opera Philadelphia and six other companies. It has proved popular with critics and audiences alike.

In addition to a series of four mainstage performances, Opera San José maintains extensive educational programs in schools along with performances throughout the community — in parks, libraries, clubs and retirement communities. Singers, often at the very beginning of their careers, are awarded annual contracts to perform not only in major productions but also at community events.