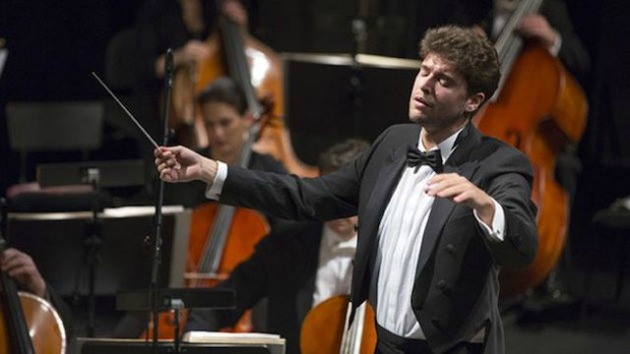 San Francisco Symphony Resident Conductor Christian Reif is in his busy final season with the orchestra, and as the highly successful Wattis Foundation Music Director of the SFS Youth Orchestra he has the rest of that season to lead too, culminating in a European tour.

A climax is what Prokofiev considered his 1945 Symphony No. 5, “the culmination of a long period of my creative life ... I conceived of it as glorifying the grandeur of the human spirit, praising the free and happy man — his strength, his generosity, and the purity of his soul.”

The Prokofiev is on the program of the SFS concerts of Jan. 24–26, led by Reif. With Lutoslawski's Cello Concerto and R. Strauss’s Don Juan, it’s a rich, varied concert.

Reif says of the Prokofiev that the composer’s words “may sound a bit pompous, but I do think that this piece has an all-encompassing scope, with the expression of hope, joy, and optimism, while there are the recurring undertones of manic or threatening darkness. And it’s that full range of expressions that makes it feel like a reflection of humanity.”

These concerts will mark the SFS debut of German-Canadian cellist Johannes Moser in the first San Francisco performances of Lutoslawski’s Cello Concerto. The work replaces the previously announced performance of Andrew Norman’s Cello Concerto, which has been postponed to a later date.

The Lutoslawski Concerto, along with the Dutilleux Cello Concerto, is featured on Moser’s most recent album, released two months ago. Moser has performed with the world’s leading orchestras and is hailed by Gramophone Magazine as “one of the finest among the astonishing gallery of young virtuoso cellists.”

Reif says Moser brought the Lutoslawski to his attention “and I’m so glad he did - it demands outstanding virtuosity and lyricism from Johannes and from the orchestra. This is the first time that SFS will perform this piece and it’ll be a genuine pleasure to share this extraordinary work with San Francisco audiences.”

The Cello Concerto was written for and dedicated to Mstislav Rostropovich, who took part in the work’s premiere, with the Bournemouth Symphony, conducted by Edward Downes, in 1970. At that time Rostropovich’s dissident status within the Soviet Union was well known, and Lutoslawski and members of his family had likewise suffered at the hands of the Soviets.

Don Juan is the tone poem with which Reif had auditioned for the SFS position. He says, “It’s meaningful for me to perform it with this orchestra. It’s an exciting and fitting way to begin an evening of gripping musical storytelling.”