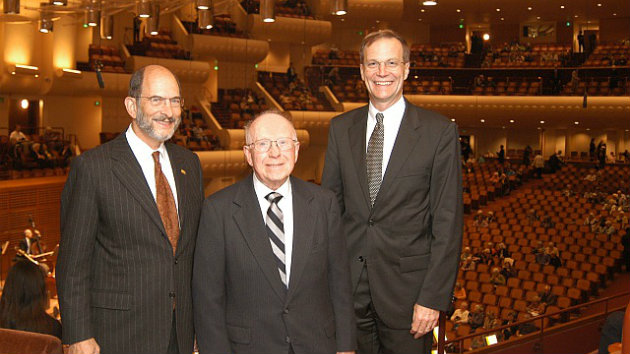 Born in San Francisco in 1920, Joseph Scafidi spent all his life in the city, leading the San Francisco Symphony administration for more than two decades. He died Monday morning, at age 94.

Music for a City Music for the World: 100 Years with the San Francisco Symphony author Larry Rothe has listed some of the major figures in the orchestra's history, including "Joe Scafidi, who joined the Symphony administration in the late 1930s as jack-of-all-trades and rose through the ranks, leaving in 1978 after years as the organization’s manager and, at last, as executive director."

After ushering in the War Memorial (then the home of both Symphony and Opera) in the 1940s, Scafidi became an officer helper with the S.F. Symphony while a student at S.F. State College. He continued work in accounting, box office, and concert scheduling until he was named assistant manager in 1954, and general manager in 1964, succeeding Howard Skinner.

The position was renamed executive director in 1974 and Scafidi held the position until 1978, when he was succeeded by Peter Pastreich; although he maintained his association with the orchestra until the present.

Even before this appointment to the top administration position, Scafidi was in charge of many activities. For example, the New York Philharmonic's archives contain correspondence with Scafidi in 1960, arranging programs and activities for the Philharmonic's San Francisco tour, led by Leonard Bernstein and Arthur Fiedler.

To get a sense of the enormous changes the Symphony has undergone through the years, here is an excerpt from Scafidi's biography, published by the orchestra in 1975:

During his years with the SF Symphony Association, Scafidi has seen activities grow from an 18-week season of 50 concerts to its current 52 weeks consisting of over 200 performances.

At the time he joined the organization, the orchestra numbered 84 musicians who were paid $60 weekly; the association's budget totaled $206,000.

The orchestra now [1975] numbers over 100 musicians, with a minimum weekly salary of $330 a week, augmented by generous fringe benefits; the association's budget is over $4 million.

(In 2015, the number of performances is about 280, the budget is over $70 million, and the contract approved earlier this year provides weekly base minimum salary of $2,892, increasing to $3,200 in three years.)

Among Scafidi's accomplishments were setting up an endowment fund that came close to $10 million in the 'Seventies [it is now about $300 million], a program to endow all principal chairs, and expand greatly the Symphony's in-school activities, the college-level SFS Forum, and other contact with Bay Area youth.

His wife, Pauline Huson Scafidi, died in 2011 at age 90; they were married in 1949, and had four children, George, Mark, and Paul Scafidi, and Anne Davey. Survivors include five grandchildren.