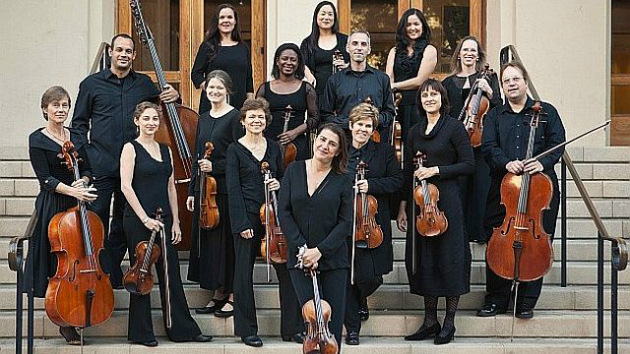 It is with a heavy heart that I leave a place so dear to me, but I do so knowing New Century will welcome a new leader from a position of strength and acclaim. From the very first moment I interacted with the orchestra, the chemistry was palpable and although there were challenges ahead, we pressed forward and began a growth process that never wavered. Without a single doubt in my mind, I feel assured of a bright future for this orchestra.

NCCO has only four series of four concerts annually, performing in Berkeley, Palo Alto, San Francisco, and San Rafael; the orchestra has also gone an extensive tours in the past. The next concerts, Feb. 4-7, will be lead by guest concertmaster Daniel Hope, in tribute to the British violinist's mentor, Yehudi Menuhin. The following series, in May, will likely to be led by Salerno-Sonnenberg again; dates and programs for the 2016-2017 season have not yet been announced.

In addition to continuing with her career as an internationally acclaimed violin soloist and chamber musician, Salerno-Sonnenberg last fall was engaged as Resident Artist in Music at Loyola University New Orleans, a century-old Jesuit school with more than 40,000 graduates in important careers around the world.

A university executive responded when I asked about Salerno-Sonnenberg's appointment: "We are amazed by the work she is doing with our students. We are so thrilled to have her here." She is regarded the same way NCCO administrators and her fellow orchestra members, but eventually a choice had to be made.

Salerno-Sonnenberg, 55, was born in Italy, immigrated to the U.S. with her mother at age 8, studied at the Curtis Institute of Music and later with Dorothy DeLay at the Juilliard School of Music. Her career took off when she won the Walter W. Naumburg International Violin Competition in 1981, at age 20, the youngest winner in the history of the competition. Two years later, she received an Avery Fisher Career Grant, and in 1999, she was awarded the Avery Fisher Prize for "outstanding achievement and excellence in music".

Since she joined NCCO in 2008, Salerno-Sonnenberg led the orchestra over a robust period of growth, including a Featured Composer program, commissioning eight new works and expanding the string orchestra repertoire, going on three extensive national tours, publishing three live recordings on her own NSS music label.

Under her leadership, New Century cultivated partnerships with the San Francisco Opera, San Francisco Girls Chorus, Chanticleer, and others. In one daring experiment, the chamber orchestra presented an entire opera, Donizetti's Rita.

The NCCO Board of Directors created a search committee, headed by founding president Paula Gambs. If there is a period between Salerno-Sonnenberg's departure and finding her successor, the organization plans to use guest concertmasters.