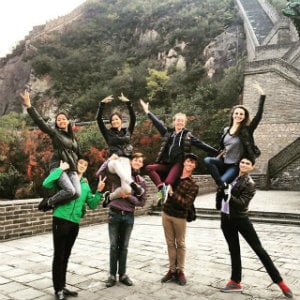 Tonight we celebrated my 20-year tenure, with a gala performance showcasing three works that were created on me. I’m glad I had the opportunity to show Shanghai how diverse ballet can be.

Returning to Shanghai to present this gala meant so much to me because it’s where I received most of my training. Shanghai is where I was born and where I first discovered that dancing is what I wanted to do for the rest of my life. The city will always have a special place in my heart.

By the way, I got a Christmas tree-sized bouquet of flowers from my old school! It was sent by my classmates from 1992, many of whom attended the shows in Shanghai. My former dance teacher also attended with her students who are aspiring professional dancers. It was fun to see the next generation at the theater.

S.F. Ballet has perhaps more Chinese and Chinese-American dancers than any other company outside the country. Principal dancer Frances Chung and Corps de Ballet member Mingxuan Wang were among them; Wang reported:

Performing in my home country was very exciting, and I’m glad I had some free time to see former classmates from the Shanghai Dance School and take class with them alongside Frances Chung. I also did some sightseeing, and one of my favorite excursions was a trip to the Summer Palace in Beijing with seven of my friends from the company. At one point, a few tourists asked for photos with us when they realized we were from S.F. Ballet!

The Ballet started its Oct. 21-31 tour in Beijing, and went on to be featured at the Shanghai International Arts Festival. Among many rave reviews, Bachtrack said "Helgi Tomasson’s San Francisco Ballet radiates confidence. Their sureness of foot provides the grounds for self-assurance, while the relaxed port de bras, and port de têtes project ease on stage. The orchestra, conducted by Martin West, played wonderfully throughout.”

Performances in China included Tomasson's Giselle and The Fifth Season; Yuri Possokhov's Diving Into the Lilacs; Jerome Robbins' In the Night; Liam Scarlett's Hummingbird; and George Balanchine’s Theme and Variations.

Multiple curtain calls are rare in China, so it was a great honor to have seven of them after Tan's gala performance. The success for her and the company was realized in face of the fact that dancing and long-distance travel don't go well together; as soloist James Sofranko noted: "It’s always difficult to get acclimated to any location more than three or four time zones away, so the more I take class, the quicker I feel ready to perform. Dancing through jet-lag is kind of like dancing in a fog or in a dream; you don’t always feel grounded. But after a day or two, everything usually feels normal again."

In Europe, ballet goes back centuries, in the U.S., the San Francisco company was the first to be established in 1933 (and about to begin its next season), but in China, dance history is a matter of a few decades. First brought to big Chinese cities in the 1930s, beginning in private schools, ballet had its real beginning in 1954, with the foundation of the Beijing Dance School (today's Beijing Dance Academy), and rapid development followed only from the 1980s on.

In addition to Beijing, today there are other strong companies in Shanghai (founded in 1979), the Liaoning Ballet (1980), and the Guangzhou Ballet (1994). Dancers and audiences of these and other ballet and dance companies in China welcomed the S.F. Ballet on its first tour in 2009, and even more enthusiastically this time.