Sarah Cahill is a local — and national — treasure. The New York Times calls her a “sterling pianist and intrepid illuminator of the classical avant-garde” and who can argue? Her seemingly boundless energy and enthusiasm for new music is manifest in her busy performance schedule, in her weekly radio broadcast, Revolutions Per Minute, on KALW, on her 20-plus albums, and in her ongoing commissions of new works from contemporary composers. All the hard work gets recognized next month when the American Composers Forum (ACF) honors her at an Old First Concerts event on Sunday, July 22, at 4 p.m. 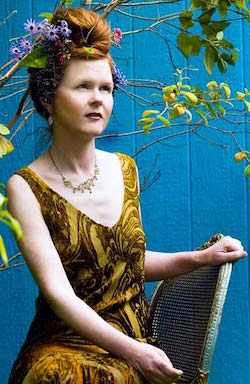 According to the ACF, the Champion of New Music Award was established in 2005 “as a national mark of recognition to honor individuals and ensembles that have made a significant and sustained contribution over time to the work and livelihoods of contemporary composers.”

In addition to receiving the award next month, Cahill will offer a recital of pieces she has commissioned or have been otherwise dedicated to her over the years.

Cahill says, “It’s a great honor to get the Champion of New Music Award from the American Composers Forum, and since it will be presented at my Old First Concerts recital on July, it seemed like a good occasion to put together a program of music which has been written for me over the years — I’m playing this same program first at Interlochen next week.”

It would be hard to overestimate how much effort Cahill has put into ensuring that 20th- and 21st-century composers find an outlet for their creative voices, and the recital will offer a sampling of that work.

According to Cahill, “I’ve done a number of big thematic commissioning projects, and the Pauline Oliveros and Annea Lockwood pieces come from a project for Ruth Crawford’s 100th birthday in 2001; Terry Riley’s and Phil Kline’s pieces come from my project ‘A Sweeter Music,’ about war and peace, in 2009; Sam Adams’s Shade Studies is from a 2015 project for Terry Riley’s 80th birthday; and John Adams and Ingram Marshall are composers I knew when I was 17. It’s not listed, but Ingram Marshall’s Authentic Presence is also on the Old First program.”

She adds, “It’s exhilarating to premiere these pieces and bring them to life and to revisit them over the decades and to explore their layers and dimensions. This is just a small selection of the 60 compositions that I’ve commissioned or have otherwise been written for me, but these are definitely some of my favorites.”