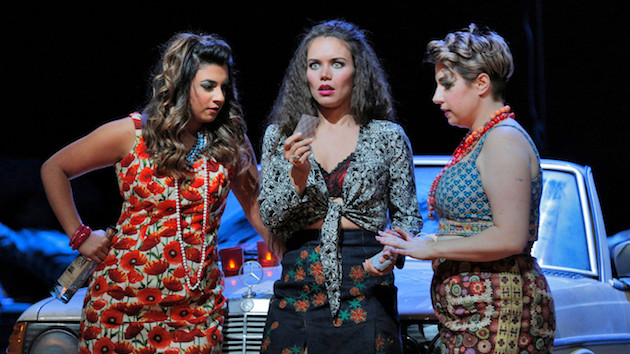 San Francisco Opera is presenting 11 performances of Bizet’s Carmen in four configurations of cast members, and a few other variations, such as Jordi Bernàcer replacing Carlo Montanaro as conductor on July 3, the day after the performance is simulcast for a free event in AT&T Park.

There are two groups of principals, and the S.F. Classical Voice review reported on the opening night cast of Irene Roberts in the title role, Brian Jagde as Don José, Ellie Dehn as Micaëla, and Zachary Nelson as Escamillo.

On the second night (and coming up on June 17, 30, and July 3), “Cast B” principals were Ginger Costa-Jackson, Erika Grimaldi, and Michael Sumuel; Adam Diegel was slated for one night only.

On Saturday, Costa-Jackson’s Carmen was wild and abandoned in voice and presence, stretching the boundaries of this generic-modern version of Calixto Bieito’s production. That worked well for the stage, while the vocal production varied between true mezzo resonance and weaker notes in the middle range.

Diegel — large, hulking, and not yet entirely comfortable on the stage — sang Don José’s customarily lyrical moments with some of the same ardor and edge he showed during his confrontations with Carmen, Zuniga, and Escamillo. Making his local debut, Diegel showed much promise for a wider range of roles. 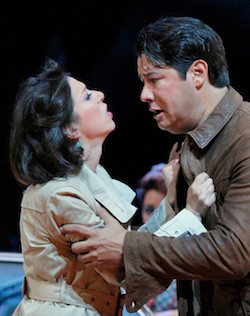 Grimaldi, also in a debut, did her best to portray Micaëla in Bieito’s concept (staged by Joan Anton Rechi) as a tough, scheming, feuding village girl, not Bizet’s understated innocent. (She, along with Frasquita and Mercédès, does not appear in Prosper Mérimée’s novella, only in the libretto by Henri Meilhac and Ludovic Halévy for the opera.) Grimaldi’s performance of Micaëla’s Act 3 aria was memorable.

Sumuel’s Escamillo on Saturday was disappointing. As a Merola Program participant in 2009, the baritone had great success, and he went on to a fine career. But he was not projecting well this time, and with his voice sounding constricted, he did not give the impression of a death-defying toreador.

Comprimario roles are mostly the same in the two casts, but Bieito’s addition to the story of a prominent presence by Mercédès’s young daughter, acted by Amalia Abecassis on opening night, was replaced by Saarika Gunapu (who will also appear on June 17, 30, and July 3).