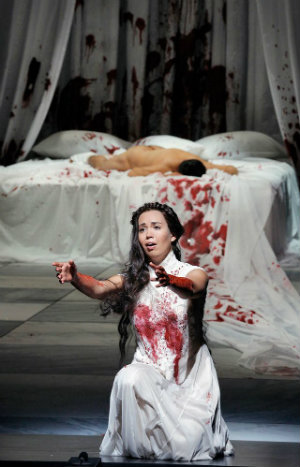 High turnover is not unusual in opera casting, especially during the fall flu-and-bug season with upper respiratory infections having their way with singers, but San Francisco Opera's announcement this morning is anything but routine.

The news: Russian soprano Albina Shagimuratova will replace Nadine Sierra in the title role of Donizetti's Lucia di Lammermoor at the 7:30 performance tonight in the War Memorial.

The background: In the beginning, just a few weeks ago, Diana Damrau opted out of the title role of Lucia, shortly before opening, to rest her voice and take time out in San Francisco with her family and husband, bass-baritone Nicolas Testé, making his debut here in the role of Raimondo.

Yanked out of a Paris Opera Don Giovanni, Nadine Sierra jetted back to SF, where she was later to sing in The Magic Flute anyway, and she performed Lucia on short notice to acclaim.

Meanwhile, Shagimuratova, cast as Queen of the Night in The Magic Flute, has canceled all performances until now, and her cover, Kathryn Bowden, made a big hit. (Jacqueline Piccolino was replaced by Julie Adams as the First Lady.)

And then the bombshell announcement from S.F. Opera this morning:

Due to illness, soprano Nadine Sierra is unable to perform. Replacing Ms. Sierra in the title role of Lucia is Russian soprano Albina Shagimuratova, who has sung the role to great success at the Metropolitan Opera, La Scala, Bolshoi Theatre, Deutsche Oper Berlin, and Los Angeles Opera, and will also perform the role in concert later this season with conductor Valery Gergiev at the Mariinsky Theatre.

Ms. Shagimuratova is also participating in the company’s current production of Mozart’s The Magic Flute as the Queen of the Night, running through Nov. 20.