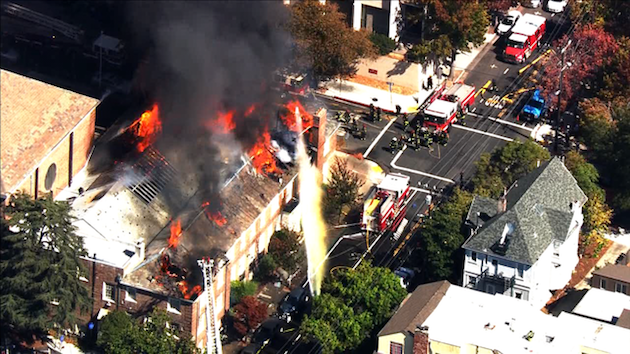 It’s been two weeks since a fire ravaged the First Congregational Church in Berkeley.  The church, which opened in 1884, is one of the great landmarks in the East Bay.

Although insurance adjusters have yet to finish their estimates, construction of a temporary roof is under way.  Scaffoldings are also going up in the sanctuary, which survived relatively intact.   Pilgrim Hall, however, is another matter and will take considerable work to repair.

A benefit concert will be held on Tuesday, October 18th at, at 7:30 p.m. in the nave of St. Mark’s Episcopal Church (2300 Bancroft Way). Performers will include: American Bach Soloists; Ars Minerva; MUSA; Music for A Viol; the Philharmonia Baroque Orchestra; Voices of Music; and the First Church Benefit Concert Choir.

“I just want to say how grateful I am to the classical music community for making this happen,” added Rev Baskette. “They have supported us with such alacrity and made a lovely effort.”

Among the groups that regularly perform at “First Congo”, and now have been forced to find other venues, are the Philharmonia Baroque Orchestra, the Left Coast Chamber Ensemble, and Volti, San Francisco.

Barbara Heroux, Volti’s Executive Director, said she was told the church would be ready by March.  “We hope that’s the case, but plan B is to have another option if need be.”  Volti has a March 3, 2017 concert scheduled for the East Bay.

Tickets for the concert available at Brown Paper Tickets.