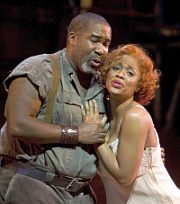 It's a long way from Catfish Row to Walhalla, but my money is on Eric Owens traversing the distance.

As heard tonight at the opening performance of the San Francisco run of the Washington National Opera production of Porgy and Bess, Owens sang the role of the crippled beggar with all the dignity Wotan so often lacks, with an inner power and appealing, memorable beauty of tone.

Are Porgy and Wotan vastly different? Yes, but so are Porgy and Gen. Groves (of John Adams' Doctor Atomic) ... or Don Fernando (Fidelio) or the Storyteller in Adams' The Flowering Tree, all of which — and many more — are roles Owens has performed with distinction. In fact, the first time I heard the bass was a decade ago, singing an oratorio at the Oregon Bach Festival.

But tonight was a surprise even for fans: Owens' singing, acting, and sheer presence was magnificent — and yet quite without an ounce of self-conscious, self-serving "stardom." Speaking of (true) stars, Laquita Mitchell's Bess was that and 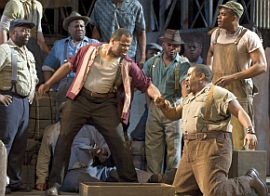 more, the voice filling the War Memorial with legato to die for.

The star performances went along with the entire brilliant ensemble production, under John DeMain's self-effacing musical direction, Francesca Zambello's dramatic but not over-reaching staging (assisted by Rita D'Angelo Tikador), on Peter J. Davison's huge, picturesque sets. The chorus (quite different from the regular Opera Chorus, but still under the direction of Ian Robertson) was so thrilling, at times astonishingly so, that I kept wishing for a time machine to take these singers back to perform in last month's Verdi Requiem.

When I say ensemble, I mean principals, secondary roles, the chorus (the chorus!), the orchestra — which ran like a brook under the singing in Act 1 and had a few hiccups in the middle of the Act 2. Everybody pulled together for the greater glory of George Gershwin's seductive early-20th-century Viennese operetta, which somehow became "the American 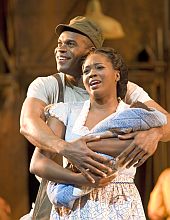 opera." I don't wish to quibble, but where others hear spirituals and folk music (really?), I pick up syncopated Korngold, Lehar, and Kurt Weill. My problem, not yours.

There is such a great experience here for first-time listeners. "Everybody" knows "Un bel di" or "Send in the Clowns," but only a fragment of the music is really heard and appreciated until that first visit to Madama Butterfly and A Little Night Music.

Big numbers in context gain expressive power exponentially. And so it is, decisively, with "Summertime," "My Man's Gone Now," "Leavin' for the Promis' Lan'," "Oh, I Can't Sit Down," "I Got Plenty O' Nuttin'," and the others. "Oh, that's what that song is about!" the theater novice will say. ("It Ain't Necessarily So," a set "number," is an exception.)

I would highly recommend this production, but the remaining six performances are all sold out. How come David Gockley, who launched this enterprise from Houston three decades ago, and who is now the general director of this company — as much under fiscal constraints as all others — didn't think of adding performances until he could balance the budget?