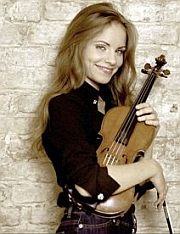 Musical repertory is full of masterpieces that rarely get programmed. Largely, it’s a matter of either instrumentation or length. On Wednesday, with a full orchestra and a handful of soloists available, Michael Tilson Thomas and the San Francisco Symphony concentrated on five of those masterpieces, as part of their “Schubert/Berg Journey.” What looked a bit dubious on paper turned out to be a grand feast at Davies Symphony Hall.

The Violin Rondo with string orchestra is one of those teen marvels of Schubert, obviously intended for home performance, and just as obviously intended to charm. It accomplishes that objective in spades. Violinist Fischer had the full measure of it, giving a more impressive performance than the other I’d heard from her. Along with MTT’s support with reduced forces, it all made for a most genteel way to open an otherwise dramatic evening.

Then came a supermasterpiece, Berg’s five Altenberg Lieder of 1912. They’re quite short and often known merely as the “Postcard Songs,” since the original poems were written on postcards. They require an extremely large orchestra and a dramatic soprano, and there’s the rub. To amass such forces for a tiny work, when precious else is similarly scored, means a major financial investment for any orchestra performing it.

Still, they’re worth it. Many of the orchestral effects are stunning, sounding as fresh today as they must have done when premiered. Tilson Thomas gave a brief chat before their performance, pointing out the astounding effect of the little snowstorm prelude to the set. That was virtuoso bravura at its finest.

Soprano Aikin sang heroically, making herself heard above Berg’s often thick din. She is a fine musician indeed, and has been rather specializing in Berg’s music, especially Lulu. Her voice is not especially rich in timbre but, considering her high musicality, that hardly mattered.

Her performances of the Lulu excerpts — “Lulu’s Lied” and the final brief shriek when Lulu’s throat is slit by Jack the Ripper, followed by the lesbian Countess Geschwitz’s dying epilogue (“Lulu! My angel!”) — were riveting, especially with the bloodcurdling shriek.

The suite was preceded by another supermasterpiece, Schubert’s Shepherd on the Rock written in the month before his death in November 1828, and scored for voice and piano with obbligato clarinet. The sheer beauty of the piece is haunting; it’s one of Schubert’s greatest vocal accomplishments. Here, Aikin employed a warmer vibrato, to add special luster to her sound.

In some ways, however, the star of the presentation was Carey Bell, the principal clarinetist of the SFS. Good grief! I can’t remember ever in my life being so impressed by a clarinet performance. Bell is a star, and why he has not been featured more often on the subscription concerts puzzles me. I’d love to hear him do the Debussy Rhapsody, for starters.

Tilson Thomas, as you may have noticed from his television lectures, is a fine, polished pianist. I’m delighted to see he’s doing Mozart’s 23rd Piano Concerto next season, something he played and conducted while still a student at University of Southern California ... and very well, too. The elegant Schubert piano part gave him no problems.

He kept the piece moving without once letting it hurry, adding an almost Wagnerian intensity as he built the music to its volcanic climax. Indeed, when he reached that point, I noticed several members of the audience rear back in their seats from the sheer sonic heat of the experience. It made for a memorable moment in an altogether memorable evening.