John Adams and the Los Angeles Philharmonic: The Dharma at Big Sur
By Jeff Dunn , 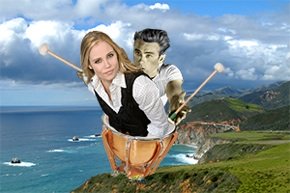 If you head to iTunes, you can check out a great new recording of American compositions in the live DG Concerts series, for which John Adams conducts the Los Angeles Philharmonic in his own work. It used to be that new classical pieces, if they got recorded at all, took years to get on a CD. But things aren’t the way they used to be, thanks to the advent of the download.

In 2003, John Adams fulfilled a commission from the L.A. Philharmonic by writing The Dharma at Big Sur, essentially a concerto for electric violin, for the opening of Disney Hall. A studio recording by Nonesuch was made with the BBC Symphony Orchestra in 2004, and a re-recording of the violin part in 2006. An extravagant package issued that year, listed at $19.98, comes with two CDs in a cardboard slip case, with the composer conducting the dedicatee, Tracy Silverman, on the electric violin, plus a second Adams work, My Father Knew Charles Ives.

The Dharma at Big Sur Part 1:
A New Day (excerpt)

Suite from Rebel Without a Cause:
Love Theme


The new DG Concert download, though, puts it to shame, except perhaps in recording quality. However inspirational Silverman may have been in getting Adams to write the work for him (the composer heard the violinist play in an Oakland jazz club in 2002), his performance sounds frankly dull compared to Leila Josefowicz’s passionate rendering of the same music — and under the same composer/conductor, to boot. Moreover, if you download the entire album from iTunes, you get two other fascinating works: the Timpani Concerto No. 1 of William Kraft, and a suite from the film Rebel Without a Cause, by Leonard Rosenman.

True, you get My Father Knew ... in the Nonesuch CD, a fine work. But it’s incomprehensible why it and Dharma, both less than 28 minutes in duration, should have been put on two CDs. It’s an affront to an age of energy conservation and recycling. Better to just download My Father Knew ... separately, if you’re an Adams fan.

What’s the music like? Dharma’s two movements together seem like one long crescendo and an accelerando. Pleasant, melismatic, and eventually ecstatic lines in the electric violin over an initially unobtrusive orchestra make you want simply to lie back and think “Om.”  You may be able to pick up the slight differences in scalar intervals due to the special tuning. What you certainly will hear are the low notes: Unlike the lowest G in an acoustic violin, the electric violin goes down to C below that G and middle C.

Kraft’s timpani concerto, performed by Joseph Pereira, displays a fascinating series of timbres and orchestral effects with a minimum of bombast — a surprise, in a percussion concerto. And, while the Rosenman music for the James Dean film has some dated atonal passages in the “Knife Fight” track (after all, the movie came out in 1955), the “Love Theme” still maintains its attraction. This exciting release is worth heading to iTunes to download.