Chanticleer: Out of This World 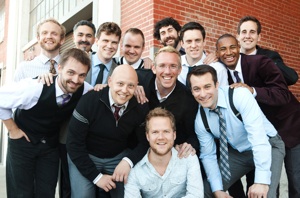 Chanticleer’s concerts often take on wide swaths of musical history, and the ensemble’s opening concert of its 2010/2011 season, “Out of This World!” is no exception. The celestial-themed program, presented Sept. 17-26 throughout the Bay Area, gathers together a far-flung repertory drawn from the Italian Renaissance, German Romantic, and American modern eras.

Floating among the stelle and Sterne are two premieres — Mason Bates’ Observer in the Magellanic Cloud and Erika Lloyd’s Cells Planets — that offer a special breed of eclecticism. Bates, a Berkeley composer of classical/electronic music, as well as a disc jockey, infuses into his piece images of clouds, satellites, and the voices of ancient Maoris, an indigenous Polynesian population of New Zealand. Lloyd’s piece, meanwhile, draws on the sounds of her indie band, Little Grey Girlfriend, for a distinctive choral/rock fusion.

Not surprisingly, Bates’ piece makes some unusual demands on Chanticleer’s dozen male singers. An entry on the group’s blog notes, “A lot of discussion was had about the right sound for the satellite’s beeps — finding a vowel for it that isn’t like a Maori vowel or a regular a e i o u vowel.” Trial and error was evidently part of the work process; the blog continues, “Adam [Ward, an alto] came up with one which we thought sounded more like a submarine than a satellite. We’ll be experimenting for a while.”

Chanticleer has a solid working relationship with Bates, having recently recorded excerpts from his Sirens (which Bates composed for the group in 2008) and programming another piece later in the year. This familiarity has bred content, as observed in another blog entry: “[Bates] really enjoyed writing for us — this time knowing exactly how everybody sounds … and being able to write music in 12 parts knowing that we will sort it out and make a fabulous texture of it. We hope we do.”

Lloyd’s piece blends indie cred with her classical chops, which include a bachelor’s degree in early music vocal performance from Indiana University. “I think because of that, there was an aesthetic to begin with that had the recognizable potential for a more complex, choral version,” she says of the original rock song. As for the choral arrangement, by Vince Peterson, founder and director of Choral Chameleon, she enthuses, “He knows Little Grey Girlfriend’s music by heart and I bet had some of these musical ideas in his head even before the prospect of arranging it for Chanticleer came along. … He added a lot of movement and texture, built on some of the chords, and added a dash of his signature cross-genre style.”

Lloyd’s own career resonates with Chanticleer’s all-encompassing aesthetic. “As a freelance musician, I have to be as versatile as possible to get by, but I really think it’s all one and the same, anyway,” she says. “Modern technology has made hundreds of years of music instantly accessible. Because this new generation of songwriters and performers has such a huge range of global influences, they are naturally incorporating it into cross-genre work. I like being a part of that. Especially in regards to an instrument as old as the human voice, not much has changed. We’re certainly singing for the same reasons and about the same emotions. The Pixies really aren’t that far off from 11th-century troubadours.”