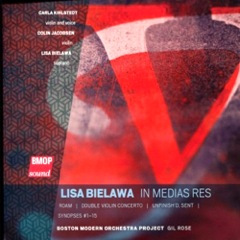 It’s not often that we get to hear such a large body of new music, developed over a long time, by one composer and played by a single ensemble. Lisa Bielawa, over the course of a three-year residency with the Boston Modern Orchestra Project, wrote a ton of new music and recorded (with a magnificent ensemble, under conductor Gil Rose) a pair of older works, as well as all the new ones. She appears, incidentally, to have made more than a handful of the sorts of friendships that are worth well more than precious metals. No one could listen to this two-CD set and not marvel.

The set’s showstopper is the two-violin Double Concerto (2008), for Carla Kihlstedt and Colin Jacobsen. If anyone else is to play it, there will almost certainly be three soloists instead of two; there can hardly be two violinists capable of singing angular, high-soprano lines while also keeping up a constantly varying, microtonally tinged series of arpeggios, as Kihlstedt does all through the central movement. That is a most amazing sound, as is (in a very different way) the rhythmically propulsive dance that takes up much of the long finale. The first movement, slowly and steadily expanding, and hardly foregrounding the ostensible soloists at all, is somehow more arresting than its more virtuosic successors; it takes guts to open a concerto with such restraint.

Roam, one of the earliest pieces here (from 2001), evokes something of the same initial atmosphere, only the opening instruments are woodwinds — at first, and for a daringly long time, just a pair of flutes. Later, there are dense but simply created textures (much glissando from strings and winds), with an eruption into sharply rhythmic music midway through. Like everything here, it’s impeccably orchestrated; you never have the sense that any effect has been misjudged. It all speaks well and truly for the composer.

The same goes for the 2009 concerto for orchestra titled In medias res. Here, I confess, I did find myself getting a little impatient — not because the music had nothing to say in its 24 minutes, but because there didn’t always seem a good reason for any given lick to be in one place rather than another. As an orchestral showpiece it’s brilliant; Bielawa doesn’t miss a trick in terms of orchestration, and her weaving-in of snippets from the little instrumental studies she composed during her residency must have meant much glee all around.

It’s just hard to know, sometimes, where it means to go, and how fast. Music that deliberately stands still, or deliberately pulls to a halt, or deliberately builds forward, all corresponds to a physical trajectory in some way we intuitively understand; this is more like a collage, or like the sort of medieval romance in which first one thing happens, then a different one, then a third, and so on. It’s magnificent at any moment, but you don’t know how many such moments to anticipate, and eventually you find yourself wondering how much is left.

Which is why maybe the best thing here was superficially the least: the 15 little solo pieces, titled Synopses, that Bielawa wrote for individual players of the BMOP in her residency. It’s not easy to compose for solo melodic instruments, even on a small scale, and Bielawa set herself time constraints (no more than a week) and a titling constraint, as well (no more than six words). Both seem to have made for a high fun quotient.

These aren’t really like the Luciano Berio Sequenzas (the only large collection of solo-instrument music for different instruments I know of). They’re shorter, much less gnarly, more genial, and far easier to play (though all challenging enough). The longest — for clarinet, titled What I Did Over Summer Vacation — runs under seven minutes.

They are surely packed with little in-jokes for the particular musicians they were written for. Anyone who has ever played for long in a youth orchestra, for example, will get the point of the viola Synopsis, called I Don’t Even Play the Bassoon. We all used to sing the words some wag set to the opening bassoon solo of Stravinsky’s Rite of Spring: “I’m not an English horn, this part’s too high for me; I’m not an English horn ...” So that solo is woven all through the little viola Synopsis.

Actually, they’re all great. No. 11 (It Takes One to Know One) is a bit challenging, what with the spoken text and all, but both that and the other percussion number, No. 2 (In the Eye of the Beholder), are about as much fun as you can have with those instruments in that space. Personally, I’d almost learn trombone for the sake of playing anything titled No, No, No — Put That Down, even if the piece itself weren’t so dementedly cool. (Its last stage is something of a Kreutzer violin étude interruptus, only, well, on a trombone.) The Synopsis following that is one for harp, and, like every piece in the set, it was obviously written by someone who knows what the instrument can do and what it cannot.

I almost forgot to mention unfinish’d, sent, the earliest piece here (2000), written for (and performed by) Bielawa herself as soprano soloist. Her voice is touching, clear, infallibly in tune. And the piece (of which the vocal section is the smaller part) is so cunningly scored that it might easily have gone on without her, so to speak; when words come on top, you feel you’ve been granted something extra.