After you’ve written a world-class masterpiece, what comes next? Thanks to the Berkeley Edge Festival, Cal Performances' third showcase for contemporary music, fans were given two concerts to evaluate the case of Frederic Rzewski (pronounced ZHEF-ski), who was born in Westfield, Mass., in 1938. Beginning on Friday at Hertz Hall with the masterpiece in question — Rzewski's 1975 marathon variations for piano, titled The People United Will Never Be Defeated! — and continuing on Sunday afternoon, several top-quality performers, including the composer himself, presented works from as long ago as 1977 and 1985, as well as more-recent works from 2004, 2006, and 2007. 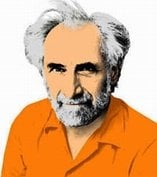 The concert on Sunday also included bonus works by Elliott Carter and Gao Ping. The result of both concerts, together with the audience response, seemed to indicate that The People United ... has never been exceeded by any of the rest of what Edge Fest had to offer.
Spreadsheet Variations
What is it about that phenomenal composition that brought a cheering audience of sophisticates instantly to its feet? Consider its numerous sterling qualities. For starters, it features a great, almost namby-pamby tune, like the one that Anton Diabelli wrote for Beethoven. The contours of Sergio Ortega’s melody, which became an anthem of resistance to Chile's Pinochet dictatorship, are distinctive and thus easily recognizable despite alteration. Moreover, the tune is a catchy earworm that listeners can sing along with in their head.

Consistent with jazz procedures, Rzewski commonly keeps each variation to the same number of bars, thus giving the tune in the head less opportunity to get out of sync with what’s actually happening onstage. Each variation offers plenty of contrast. Some are breathtakingly spectacular, in terms of the virtuosity needed to bring them off, giving the work a lot of "wow" factor. 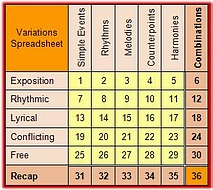 The structure of Rzewski's variations

Finally, Rzewski built a rock-solid structural base that alert listeners can follow: 36 variations in a six-by-six spreadsheet (before Lotus 1-2-3 it was called a matrix), where every sixth variation sums up the previous five, and the last six sum the entire work. So there is plenty of "review" of previously introduced material to help it soak in, and fortunately the material is so inspired that the listener is dying to soak it up.

The performer of The People United ... was none other than its commissioner. Ursula Oppens asked Rzewski for a companion piece to the Beethoven Diabelli Variations for a performance she was giving in Carnegie Hall; she was the first to perform and record it. While Oppens' playing doesn’t quite display the superhuman virtuosity of a Marc-André Hamelin, or the power of the composer himself, both of whom have recorded the work, she certainly “owns” it interpretively. The many subtleties she brings to the piece were a joy to hear.
Powerful Tremolos
For the second half of the first concert, Rzewski performed his Four Pieces (1977), which he also wrote for Oppens. Rzewski likens the work to a quasi-sonata in four movements with a single theme that reappears in different guises. The work starts with a rocking, pretty melody that may have been the theme in question, but I couldn’t pick it up in the subsequent pieces/movements on first hearing.

All the pieces have étudelike qualities, and each one exploits various technical or interpretive devices, such as scary tremolos and bangings in the first piece (or movement); three-note groups, clusters, and trills in the second; descending octaves, trills, scales, and maybe a bit too much of everything in the third (for my taste, it went on too long); and a procession of ostinatos in the fourth. The composer played all of these with power and captivating authority, his large hands almost shaking the floorboards with his tremolo.

The premiere of Nanosonatas, Book 2 began the second Rzewski concert, performed again by the composer, who describes a nanosonata (his own coinage) as "a form in which different elements come together as they do in a sonata. ... Instead of developing, they are left hanging." A grab bag of interesting ideas for études was my impression of the seven nanosonatas in this book. In terms of subjective duration, however, most of the ideas seemed to be of micro-, not nano-, length.

Two Rzewski works for percussionist were performed that required the player to carefully recite texts at designated intervals. To the Earth (1985) had William Winant rapping four terra-cotta flowerpots with I-Ching-like sticks. Act 6: Sacrifice, part of a new, larger work, had Ben Paysen shaking a hollow stick filled with loose beans and playing a glockenspiel.

While the music portion of the performances sounded intriguing, the words were distracting. These superb percussionists have ordinary voices, after all. The words contained significant meaning and continued through most of the music. Shouldn’t a reader with a theatrical voice have provided the commentary? This would have heightened the irony of ponderous thoughts expressed about the earth's fragility, and even more ponderous political quotations (Thomas Jefferson's "I tremble for my country when I reflect that God is just and his justice cannot sleep forever"), being accompanied by relatively puny percussive sounds.

The second concert concluded with Bring Them Home! from 2004, for two pianos and percussion. The 35-minute work, based on the Irish song "Siuil, a Run," was long on incident but short on climax and inevitability. It had far too many fits and starts, though many details were fascinating.
Climbing Steep Mountain Paths
Of the two non-Rzewski pieces, Ping’s The Mountain, for two pianos, was by far the more interesting. The work was commissioned and performed by Oppens and Rzewski, and reflects the composer's memories of his native Sichuan, China. It contains a powerful central section, a simultaneous passacaglia and fugue. Inspired by the image of "peasants carrying heavy loads of rice and vegetables on steep mountain paths," the passacaglia is a hypnotic and dismal march theme (with notes similar to those in the Epilogue movement of Vaughan Williams’ Sixth Symphony).

Carter’s Intermittences, on the other hand, which is supposed to reflect "the many meanings silences can express in musical discourse," offered hardly any true silences — just a series of dry notes, ably played by Oppens, that I’m sure would reveal wonders after a thorough analysis of the score.

Thirty-two years have passed since The People United Will Never Be Defeated! was commissioned. From the works performed in these two concerts, it can be said that, since that milestone, Frederic Rzewski has lost none of his inventiveness. For the most part, he continues to retain the attention of his listeners, even when the works are less compelling and more diffuse. One thing can be said for sure: Rzewski’s program notes for his 1985 piece should be updated, because buying four flowerpots now costs $5 at Home Depot, not the $1 given in the notes.