Achieving the right balance of sound in Debussy’s music is a challenge because of the composer’s sense of timbre. Sometimes he uses a single instrument to provide an imperceptible nuance of color, which requires the conductor to make the effect audible enough to matter but subtle enough to avoid undue attention. This is where many Debussy performances fail — accompaniment figures are given too much emphasis and sound arbitrary.
Michael Morgan triumphantly managed the difficult trick on Friday night at the Paramount Theatre, when he conducted the Oakland East Bay Symphony in performances of Debussy’s Prélude à l’après-midi d’un faune and La Mer. In the opening piece, Morgan took care to preserve the special role accorded to the woodwinds. He shaped the strings’ gestures delicately, allowing them to provide a silky sheen of background color without overwhelming the rest of the ensemble.

The next piece, Beethoven’s Violin Concerto in D Major, Op. 61, requires an altogether different sense of orchestral balance. Like other works Beethoven composed around 1800, the violin concerto contains intimations of the “heroic style” — a military march here, a string fanfare there — that characterizes the Fifth Symphony and the “Emperor” Piano Concerto (No.5). Morgan generally chose not to exploit these moments and instead distributed the music’s energy more evenly — at times thinly — across the course of the concerto.
Wizardly Soloist With Wide Range
Violinist Axel Strauss seemed to play along with this reading. His solo passages began as introspective soliloquies rather than heroic exhortations, and the effect was genuinely moving. His violin sang in the second movement, leaning into the extreme high notes with exactly the right amount of pianissimo. But as the piece progressed, Strauss showed he could play heroically, too. His cadenzas often made you wonder if two violinists were not playing. Indeed, Strauss’s interpretative impulses sometimes conflicted with Morgan’s. In the last movement, especially, Strauss frequently echoed the violins with physical jerks of his head, as if wanting to do the conducting himself.

The other centerpiece of the program was the premiere of River of Mercy by Andrew Norman, a young and already highly decorated composer. The piece, a setting of John Muir’s poetic ode to the Merced River, is a tapestry of sound effects for orchestra and wordless chorus, overlaid by a spoken recitation of Muir’s text. It called to mind Aaron Copland’s Lincoln Portrait (1942), and indeed Copland’s ghost could be felt throughout River of Mercy. Norman’s large melodic and harmonic intervals evoked the expanses of the Sierra Nevada in exactly the same manner as Copland’s depictions of the “wide, open spaces” of Midwestern prairies.

Norman’s melodramatic paean to the Merced relied on predictable devices. I don’t think it surprised many people that the opening gesture, a sustained note in the flute representing the call of the wild, came back at the very end to demonstrate nature’s cyclical perfection. Kirk Eichelberger’s histrionic narration made it difficult not to liken the piece to a nature documentary.
Standard-Issue Nature Painting
There were times during the piece when I tried to blame Muir's overwrought poetry for the leaden effect. But Muir's inflated rhetoric was greatly magnified by the insistently mimetic manner in which Norman's music shadows the text at every turn. At one point, the narrator orates: "Everything is music / The harmonies all so simple and young / Easily apprehended by those who will keep still / And look / And listen." Here Norman inserts several moments of silence as if worried we won’t get the point. Still, since I have a high tolerance for kitsch and try to defend it when I can, I was willing to grant River of Mercy a few points for earnestness.

Norman’s piece initially had the effect of making Debussy’s La Mer also sound like an exercise in musical onomatopoeia, recalling the criticisms it earned at its premiere in 1905. But Morgan again deftly navigated the quirks of this challenging score with expert conducting. As with Afternoon of a Faun, Morgan concentrated his efforts on achieving the right balance of sound, favoring clarity of texture over expressive shaping. 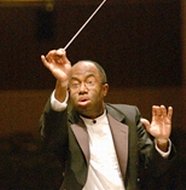 He may have been too restrained in some passages. It took some time for the lively rhythms of the second movement to settle into a properly jovial mood. Morgan did not exaggerate the contrasts in dynamics, making the third movement’s thunder a little less ominous. But he recognized that it is best, in Debussy’s music, to err on the side of understatement. Debussy’s coloristic effects can delight a listener with their ingenuity alone, and Morgan was happy to let them speak for themselves. He launched into the third movement’s climax so subtly that the audience found itself in the midst of a frenetic race to the end before it knew what was happening. Making a century-old piece sound fresh is not easy, but Morgan found a way.