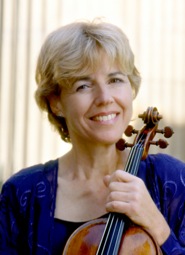 It’s been quite a career change, but beloved violist Geraldine Walther has had a wildly successful six years with the Takács Quartet after leaving the post she occupied for 29 years as principal with the San Francisco Symphony. Since then, the quartet has been awarded the Commander’s Cross of the Order of Merit of the Republic of Hungary and a Royal Philharmonic Society Award, made several recordings, and circled the globe several times over. Still, it was easy to hear the homesickness in her voice when Walther spoke to SFCV from her kitchen in Colorado. Walther returns to San Francisco on June 15 to present a concert for Chamber Music San Francisco with a few of her old musical friends. We asked her about the different path her life has taken.

You left San Francisco and your position as principal violist with the San Francisco Symphony six years ago now. Does Colorado feel like home?

Well, we’ve only been here six years after 30 in the Bay Area, but Boulder is nice. The advantage is that it’s not too densely populated and the pace of life is not as fast, so when I come home from a tour I can unwind. There are some wonderful musicians at the University of Colorado and a very supportive community here.

You’ve changed musical roles so dramatically, from symphony musician to chamber musician and teacher. Can you tell us a bit about life in the Takács Quartet?

I really enjoy this particular group — it’s a very different type of quartet. Two members are Hungarian, one is British, I’m American, and three are male. I never would have started a group like this! But we all complement each other and I feel so very lucky to be a member.

So, what is it like to tour with them?

The quartet doesn’t hang out too much during our free time. We’re always rehearsing and playing together and we’d want to kill each other if we did, so spending so much time alone has been one of the challenges. In the orchestra I had so many friends and I miss them.

What are some of the other differences between playing in the orchestra and in a quartet?

It was a lifelong dream of mine to learn all of the Bartók and Beethoven Quartets, and now I have.

Certainly, the repertoire. It was kind of a lifelong dream of mine to learn all of the Bartók and Beethoven Quartets, for example, and now I have. And I love the orchestral repertoire, too. I was just talking to a friend who was playing Mahler [Symphony No.] Five and thinking I’d hate to think of never playing that piece again — the Adagietto is so unbelievably beautiful.

In the orchestra you see much more of a variety of repertoire; after all, the quartet plays 90 concerts per year, and the San Francisco Symphony plays 150. Orchestral musicians use a different set of skills. You face a new conductor and new program every week, with three or four works that you didn’t play last week. The quartet performs the same piece and keeps rehearsing it to try to make it better. You have to enjoy working in depth on pieces, yet finding ways to keep them fresh.

Yes, the Takács Quartet has received accolades for its performances of complete string quartet cycles. What do you learn from that type of programming?

It’s such a journey for the audience and us as musicians. I never realized the vastness of Beethoven’s humor and compassion — all of the emotion that is in this music. When you play an early, middle, and late quartet on one program, you see how far the guy came in his lifetime. It also changes the way we perform them: It forces us to really bring out the their differences.

Do you enjoy the teaching role?

Yes, I’m doing much more teaching than I’ve ever done before and I’m getting better at it. The students are very appreciative of what I have to say. I try to realize that whatever I say is going to be my own viewpoint, and that will never be 100 percent of what needs to be addressed. You just start from one corner and pull from there.

Is it tough on your husband to have you gone so much?

He’s got a lot more freedom and solitude than ever before, and I think he’s enjoying that. He’s really been so supportive, an unbelievable rock for me, and I couldn’t have done any of this without him, especially raising two daughters. He’s been fantastic, and really made it all possible.

You come back and perform in town when possible, like this concert with Chamber Music San Francisco, and also with the quartet. Is that bittersweet?

I always look forward to seeing friends and having a good time. There’s no place like the Bay Area. I travel all over the world, and when we get back to the Bay Area the guys remark on how beautiful it is and I say, “Look what I gave up for you!”