Perhaps it's just me, but I possess a stereotypical image of a brass quintet. It is an image of gray-haired men who chiefly play Renaissance and Baroque music, with the occasional Christmas album thrown into the mix to shake things up a bit.
Regardless of whether my image might ring true for others, the Meridian Arts Ensemble certainly does not fit that stereotype. For starters, this New York-based ensemble is actually a sextet: a brass quintet with an added percussionist. It performed Sunday at Dinkelspiel Auditorium as part of the Stanford Lively Arts concert series. The oldest piece on the program dated from 1933. The style of its repertoire could only be pigeonholed as contemporary — and eclectic. 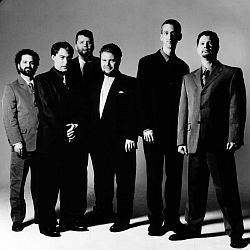 The program did open, though, with two pieces that shared a Latin American flair. The first was Ocho por radio. Composed by the Mexican musician Silvestre Revueltas, it was arranged by Meridian's own trumpeter, John Nelson. A Cuban-American composer, Dafnis Prieto, composed the second piece, which Meridian Arts Ensemble had commissioned. Echo/Dimensions combined the rhythmic vitality of Afro-Cuban jazz with timbral and textural contrasts.

The centerpiece of the program was also chock-full of contrasts and surprises. It was Magnetic North, another piece composed for Meridian, by Stanford faculty member Mark Applebaum. Instrumentation accounted for some of the novelty, since Applebaum joined the performers to play on a "Mouseketier." This homemade instrument featured a few soundboards, which were connected to amplifiers and sound mixers.
Mystery Components
On the soundboards stood various formidable-looking contraptions, including wires, strings, and something bronze. (While the precise etymology of the instrument's name is a mystery to me, I suspect it might concern one or more of these mounted objects.)

The resultant instrument was one whose visual appearance was as daunting as were the electronic sounds it produced. Jenny Bilfield, the artistic and executive director of Stanford Lively Arts, remained at the side of the stage as she introduced the program. She did not dare approach too closely Applebaum's Mouseketier that was usurping center stage.

Instrumentation aside, histrionics also contributed to the shocks of Magnetic North. Balloons, aluminum foil, Ping Pong balls, glass bottles, paper bags, and choreographed movement numbered among the props and gags. But this is not to say the piece was all show and no substance. On the contrary, a member of Meridian claimed that Applebaum's piece was among the most difficult the ensemble had ever undertaken. The complexity was even obvious in the notation. The score was put on display for the audience during intermission. A woman sitting one row in front of me said she would like to frame each page and hang them all in her living room.

A brief Fanfare for All by Milton Babbitt ushered in the program's second half, which featured a premiere, as well as two pieces that Meridian holds dear. The premiere was Stillas, composed by Per Bloland, a Stanford doctoral student who studies with Applebaum. Introducing his piece, Bloland was quick to concede that his work sounds quite different than Magnetic North.

Granted, it was not a theatrical piece, but Stillas embodied drama of its own sort. It was a dialectical sort, between a smooth surface with few sharp contrasts and an underbelly of taut, relentless quarter tones. Bloland explained that his piece is part of a larger work. Intrigued by it, I would be interested to hear that larger work in its entirety.
Potpourri of Styles
The final two pieces are seemingly staples in Meridian's repertory. David Sanford's Corpus was one of the ensemble's first commissions. Its six-movement structure references a Baroque cantata, because each movement is based, however loosely, on the same tune. But each movement also references a particular style, and none of them sounds Baroque.

The styles instead belong to the 20th century, though not necessarily to the concert hall. The styles include 1940s bebop, and rock evocative of the late 1960s. The final piece, Echidna's Arf, was another jazz/rock tribute to that musical eclectic the late Frank Zappa. Meridian used to play Nelson's arrangements of Zappa's tunes for Zappa himself.

In the end, whether evoking a mariachi band or Led Zeppelin, whether playing a piece specifically commissioned for the ensemble or a piece arranged by one of its members, Meridian Arts Ensemble consistently put the "lively" in Stanford Lively Arts. Like Applebaum's Magnetic North, this ensemble combined serious musicianship and well-executed virtuosity with audience-engaging humor, which made the complexities of the new music it performed palatable indeed. If Meridian Arts Ensemble does defy stereotypes, it does so only to set standards of its own.