The Takács Quartet returned to Hertz Hall Sunday for another installment in its all-Beethoven cycle, under the auspices of Cal Performances. It was great to see that the Quartet has developed an enthusiastic Bay Area audience, one willing to forgo a gorgeous afternoon to delve into the intricacies of two of Beethoven's most challenging quartets. I have had the pleasure of reviewing two of its earlier local performances, and was glad for an opportunity to hear it with its newest member, violist Geraldine Walther. 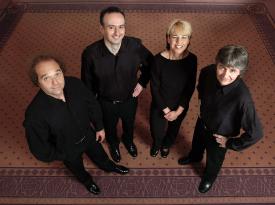 In the Takács' previous incarnation, I had been impressed with the performers' ability to alloy four independent musical personalities into a distinctive whole. Perhaps they are still making adjustments, or perhaps it is simply that I have come to expect so much from this group, but I found Sunday's performance somewhat less convincing. Walther is certainly not to blame for this; she is a fine violist, with an uncommonly warm and fluid sound, as well as a strong and convincing personality, but I fear that her strengths have thrown some of the quartet's weaker characteristics into sharper relief.

The program opened with the C-Major Quartet, Op. 59, No. 3, which is generally considered the most accessible of the three "Razumovsky" quartets but which opens with one of Beethoven's most mysterious slow introductions. Introductions are normally expected to set the key of a work, though Beethoven loved playing with expectations, and the first sound we hear is a dissonance that abruptly fades to silence. To make things even more ambiguous, he voices this dissonance as a fully diminished seventh, a chord that could resolve to any of four different keys.

This tonal ambiguity is stretched out for several minutes, with pregnant silences and deft feints toward keys that never quite come into focus, before finally launching into the quick tempo of the movement proper with a perfunctory C-major cadence that slips by almost without notice. The Takács treated this introduction to some wonderfully imaginative timbres — I particularly liked the effect of an icy, nonvibrato pedal from cellist Andras Fejer that underlay warmer sounds in the upper strings.

I've always appreciated the sense of abandon with which the Takács approaches its performances, but on Sunday the tempos in the faster movements were sometimes a bit too ambitious. The Allegro vivace was appropriately vivacious, particularly Edward Dusinberre's quicksilver twists and turns in the quirky first subject, but it would have been more effective had he treated the trills that conclude the faux cadenzas a little less predictably.

Later in the movement, coordination between the musicians suffered. In these quartets the slightest imprecision really sticks out, but, more important, dramatic ideas were obscured by a sense of frantic scrambling and a lack of imaginative shaping.

The sense of mysterious searching returned in the plaintive Andante con moto, in which Dusinberre's wiry gestures found a welcome counterpoint in warmer sounds from Walther and second violinist Karoly Schranz, supported by Fejer's well-shaped pizzicato line. Early in his career, Beethoven had adopted the scherzo as his standard third movement, but here he gives us an old-fashioned Haydnesque minuet, which Dusinberre led with characteristic aplomb.

The minuet serves as a perfect foil for the virtuosic Allegro molto finale. Here the Quartet's penchant for pushing the tempo was most problematic. Its performance was an admirable athletic achievement, but the sound was forced and scrubby, and there was too little of the playful toying with our expectations that this ersatz fugue calls for.
Athletic Approach
The B-flat Major Quartet, Op. 130, which made up the second half of the program, was performed with its original final movement, the Grosse Fugue, one of Beethoven's most complex and masterful works, later published separately as Op. 133. Although I found the athletic Takács approach to the Grosse Fugue disappointing, suffering from many of the problems just mentioned (forced, frantic, and with too many uninflected phrases), its handling of the first five movements of this eccentric work reminded me why I have enjoyed its previous performances so much.

The opening movement, as quirky and mysterious in its own way as the introduction to the C-Major Quartet, was colorful and carefully paced. The abrupt juxtapositions of tempo, dynamics, and texture (ranging from simple unisons to dense polyphony) were truly startling, as they should be.

The second movement, a bagatelle, cast as a whispering minischerzo with a deranged, stomping violin trio, whisked by breathlessly. The droll humor of the third movement, together with the almost inebriated and giddy rustic country-dance atmosphere of the fourth, came through perfectly in the Takács' performance. Finally, there is the inspired Cavatina, a dramatic world in itself.

If only Sunday's performance had ended here. According to Karl Holz, the second violinist of the Schuppanzigh Quartet, which premiered all of Beethoven's late quartets, the Cavatina held a special place in the composer's heart, and toward the end of his life, the mere thought of it would bring him to tears. Sunday's performance lent credence to Holz' anecdote. Need I say more?