San Francisco Conservatory of Music's young artists went way back in time to present an opera three-and-a-half centuries old, last weekend in Fort Mason Center's Cowell Theater. Richard Harrell, director of the Conservatory's Opera Theater, has bravely (and judging by the results, wisely) selected Francesco Cavalli's 1643 L'Egisto, a sensation in its time, but virtually impossible to find performed today.
Harrell was also stage director of the production, which was visually defined by Dean Shibuya's occasionally jerky, at times confusing, projections. These included an image of Delos looking for all the world like Teotihuacan.

Cavalli was along for the ride at the birth of public opera performances in Venice, as Monteverdi's student at St. Mark's Cathedral. L'Egisto joined Monteverdi's 1641 The Return of Ulysses, and 1642 The Coronation of Poppea, spreading the popularity of opera through Italy and then all over Europe.

It's the Conservatory’s obligation, and privilege to present works like L'Egisto, something beyond the ability of most commercial companies. Cavalli brings up bittersweet memories of San Francisco s Spring Opera program, which met its demise during a previous San Francisco Opera administration. Unlike the parent organization, whose first obligation is to keep afloat financially and gather a large audience, Spring Opera could and did take risks, memorable ones. In 1974, it presented Cavalli's L'Ormindo in the Curran Theater, and the cast included such then-young talent as Maria Ewing, Barbara Hendricks, Gwendolyn Jones, Grayson Hirst, and Philip Booth. I wish S.F. Opera's David Gockley success in his quest to bring Spring Opera back to life.
Cavalli’s Advocates, on Stage and in the Pit
Is Cavalli's music as grand as Monteverdi's? Not quite, but the Conservatory production made an excellent case for the opera’s musical values, with an amazing young singer in the title role and a red-hot orchestra, mostly of students, under the firm, loving direction of Christopher Larkin. 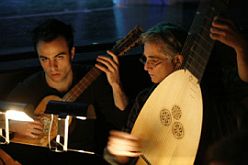 Paul Psarras on guitar and Richard Savino on theorbo

All photos by Rory McNamara

The conductor himself and Darryl Cooper played harpsichord. Also in the continuo section: faculty member Richard Savino on theorbo, and students Paul Psarras, on Baroque guitar; and Hallie Pridham on cello (modern). The rest of the orchestra, with Edwin Huizinga as concertmaster, was made up of students, and they just ate up the score, rising to astonishing heights of ensemble performance. (The same orchestra also played fabulously at the Conservatory's recent John Adams concerts.)

Music must carry the show because the story is hopeless. There are four pages of synopsis in the program, you get dizzy with the profusion of supertitles, and yet ... it's hard to say what's going on. Apparently, in lieu of TV soaps, the 17th century enjoyed its convoluted love stories in opera librettos of the kind Giovanni Faustini delivered for L'Egisto.

There are feuding gods and lovers falling in and out of love. There is Amor, or Cupid (Erica Schuller on Thursday and Dana Atwood on Sunday, with anachronistic, but fetching blond bobs), getting into no end of trouble, including a hilarious dustup with the ghosts of four great heroines who died because of love (Semele, Phaedra, Dido, and Hero, each of whom got operas of their own many times over in subsequent centuries). In the beginning, Night and Aurora fight over the primacy of darkness or light. At the end, Hours sing of the passage of time, but much else has happened. 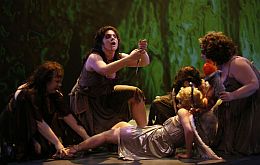 The Ores battle with Cupid

The central plot, is like A Midsummer Night's Dream with its two pairs of lovers with their fast-changing allegiances, plus the Oberon-Titania tiff. The title character is a son of Apollo, not much helped by his semidivinity, who goes through many hardships and loses the love of Clori. Then there is a character called Lidio, who is switching back and forth between Clori and Climene. Egisto wins Clori back in the end, but not before going insane and performing one of opera's very first mad scenes.
Eleazar Rodriguez, Tenor With a Capital T
In a heroic four-performance marathon (in the otherwise double-cast production), Eleazar Rodriguez sang the title role with singular distinction. His is a naturally placed, effortless, sweet, and appealing tenor. He gave a bel canto-style performance, which is a couple of centuries premature for Egisto, but the voice is so right and true, its beauty so great, that stylistic faultfinding is besides the point. The 23-year-old Mexican tenor came to the Conservatory only last year. You can hear him sing in this YouTube video, an excerpt from Così fan tutte 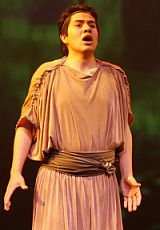 Thursday’s cast introduced another exciting young talent: Evgenia Chaverdova, a tiny singer with a huge voice and talent to burn, in the role of Climene. I am not sure if she is going to make her mark as a soprano or mezzo, but when the multitude of voices in her throat is distilled to a single one, the world may well note and remember. The other Climene, Jennifer Panara, sang well on Sunday, in spite of an announced indisposition.

The first cast's Clori-Lidio pair was fine, Katie Gerber singing circles around Elana Cowen, but on Sunday, Sepideh Moafi and Lauren Groff blended their voices quietly, in a deeply affecting duet. (There is no greater challenge for young singers than to hold back, and let the music speak through them.) 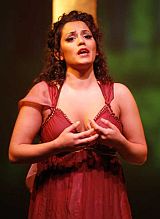 In the travesty role of Dema, "a woman of experience" with some unconventional wisdom to share, Trey Costerisan in the first cast hammed it up way too much. The second cast's A.J. Glueckert got it just right. Some of the young singers struggled occasionally, but no one gave less than his or her all.