As the audience filed into the SOMArts Cultural Center, a warehouselike space deep in San Francisco’s industrial flatlands, on Saturday evening, the houselights were down and a man (Adam Fong) was silently 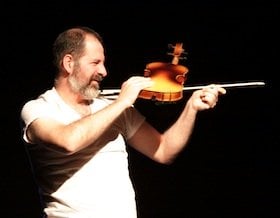 polishing a double bass on stage. The occasion was Other Minds’ celebration of the 50th anniversary of Fluxus, a performance art movement that launched much of what’s now regarded as typical of conceptual art.

So the first question that came to mind was: Was this part of the performance or not? Well, that’s up to the individual viewer’s perception, isn’t it? Fluxus was founded on John Cage’s principle that art is whatever we put a frame around and call art. After a while, Fong stopped polishing, stood up and took a bow, the houselights went up, and the audience applauded, so that was the frame and thus the answer: It was intended as a performance. It was Solo for Contrabass by George Brecht, the research chemist turned avant-garde artist who invented the “event score,” usually a single sentence, often a single verb, directing some everyday action. It’s an idea that’s often been ridiculed or parodied.

It’s also an idea much imitated. Fong, Luciano Chessa, and Adam Overton performed several other brief event scores by Yoko Ono (from her pre–John Lennon days) and others. They screamed (briefly), hit walls with their heads, swept the stage, and passed blank sheets of paper out to the audience. Hannah Higgins, an art history professor from the University of Illinois, gave a talk applying Henri Bergson’s philosophy of art to Fluxus events, while her mother, Alison Knowles, one of the original Fluxus artists, seated at a table piled high with vegetables, performed her own event score, Proposition, which reads: “Make a salad.” (The results were handed out to audience members at intermission.) Later, Knowles carefully wrapped her daughter up in an Icarus-like costume made of crinkly flax paper, in her event piece Loose Pages.

Saturday’s pieces were more theatrical than musical. Their primary impact was visual.

Higgins argued in her lecture that Fluxus events may be parsed as music. Like traditional music, they take place in delimited spans of time and move toward directed endings. At the end of Beethoven’s Fifth Symphony, the goal achieved is a blazing C major; at the end of Proposition, the goal achieved is fixing a salad. (My comparison, not hers.) If you look at them sideways, might it be the same kind of thing? Fresh food has been a popular medium at Fluxus, Higgins said, because it’s perishable, showing up artistic permanence as an illusion, and because as a common material it grounds art in the everyday world.

The Eyes Have It

It seems to me, though, that duration and evolution are just as basic to the dramatic arts as to music, and that — with the exception of Composition 1960 #9 by minimalist pioneer La Monte Young, a long-held 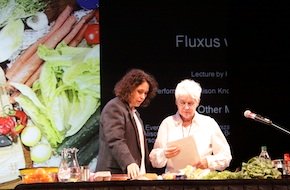 electronic hum; and some similar experiments in tone generation by Yoshi Wada — Saturday’s pieces were more theatrical than musical. Their primary impact was visual, and any sound made in the process was secondary and incidental. Even George Maciunas’ Solo for Violin, the only other piece besides Brecht’s that involved a conventional musical instrument, was mostly about visibly goofing around. Chessa held the bow up to his shoulder and moved the violin over it instead of the other way around; not surprisingly, this didn’t produce much sound.

This may read as being terribly pretentious. In fact, though, much of it was funny. The audience, largely experienced in performance art, laughed often, for instance during the salad-making when Higgins tossed out eggs (hard boiled, but we weren’t to know that) to us, and Higgins and Knowles themselves were smiling as they performed an event piece whose score instructed them to make and eat spaghetti sandwiches. The point of the one with the blank sheets of paper (Sanitas No. 35 by Tomas Schmit) seems to be to wait for the audience spontaneously to make paper airplanes out of the sheets and launch them around the auditorium.

It was evident from Saturday’s show that Fluxus’ original mission — to expand the boundaries of art and music — is still edgy today, and that its practitioners have not forgotten to have fun while doing it.