At the Aspen Music Festival and School, Music Director David Zinman came up with what is at least a partial solution. Since 2000, a select group of conducting students takes part in the American Academy of Conducting at Aspen. The program was inspired by Zinman's own studies in a similar orchestra beginning in 1958 under Pierre Monteux in Hancock, Maine, and his wish "to pay back what he gave me." 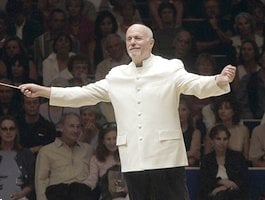 This year, some 160 applicants sent in videos, recommendations, and resumes. Zinman screens the top 70 candidates. Then, says Associate Director Murry Sidlin, "We have a little ritual. All the videos we reject, we put into a pile on the floor, and we look at them and say our apologies." (See the application information.)

In Aspen, Colorado, this summer, 17 conducting fellows — 15 men, two women, ranging in age from 18 to 50, from all over the world, including the Bay Area, Australia, and France — took their turns at the podium and in the orchestra, whose members all are on full fellowships, eight times a week. Says Sidlin, who's spent 29 summers at Aspen, “It's the only place we know of in the world that provides so many opportunities to stand up in front of an orchestra. Being in this program is not a guarantee of getting a job, but it's a guarantee of getting an audition for getting a job."

There are no precise figures on how many jobs might exist for how many conductors, but it's Zinman's belief that "for good conductors there's always a big market." Zinman should know. He led the Baltimore Symphony Orchestra for 13 years and is in his 11th year as music director of the Tonhalle Orchestra in Zurich.

The conducting orchestra's alumni include James Gaffigan, 27, the San Francisco Symphony's first-ever associate conductor, and Tito Muñoz, 24, assistant conductor of the Cleveland Orchestra, in Aspen this summer as the festival's assistant conductor. Alums are climbing career ladders at other orchestras, as well. Several conductors are among the illuminati who've studied at Aspen since its founding in 1949: James Levine, James Conlon, Pinchas Zukerman. Each summer, Zinman can invite one conductor to appear at the Blossom Music Festival in Cleveland. Gaffigan says that's what led to his being hired, straight out of Aspen, as the Cleveland's Orchestra's assistant conductor.

To get into Aspen, Gaffigan sent Zinman and Sidlin a videotape that showed him "kind of waving my arms around," he recalls by phone. So he found himself at the Aspen Music Festival and School, or AMFS for short.
The Sound of Money
The school is on a verdant, woodsy campus (the rest of the year it's a private school) with a beaver pond, canoes, a dining hall, dorms, and classrooms. It's two miles uphill from downtown Aspen, where the festival itself takes place. A fixer Victorian downtown can cost $3.2 million and a martini $15, and the airport can no longer hold all the townsfolks' private jets. The festival's main venue is the 2,050-seat Benedict Music Tent, gleaming white in a parklike setting. Here and out on the grass, audiences soak in the sounds, nine weeks worth, 300-plus events in all, provided by 700-plus students and guest artists. There are rehearsals early Sunday morning, when locals breakfast on the lawn and try not to rattle their New York Timeses. 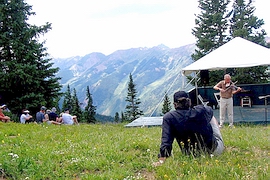 The view from Aspen

There are recitals around town all week at lunchtime, and, one night, Carmen, was fed from the gilt-edged Wheeler Opera House to a jumbo screen in the park, where the garbage cans have bear-proof latches. Concerts are held every night. Students from all over the world, some already professional, some still in high school or college, make their rounds, by bus, bike, car, up to the school, down to the festival. Practice, practice, practice. Nights, they busk downtown in informal ensembles as music appreciators with ice cream cones, kids, and dogs toss cash into their instrument cases.

Early in August on a warm Sunday morning, the conducting orchestra rehearses in a classic camp-style building: wooden porch, peaked roof, cathedral ceiling, rough-hewn beams, crammed full of musicians, music stands, scores, water bottles, instruments, conductors, and teachers. They're preparing for the weekly Tuesday afternoon concert: Overture to The Flying Dutchman, Grieg's Piano Concerto in A Minor, and Beethoven's Symphony No. 3, "Eroica," with a different conductor for each movement. When the student conductors are not on the podium, they're playing. Although other AMFS orchestras present an array of musics, including commissioned works, the conducting orchestra focuses on the standards, says festival President and CEO Alan Fletcher, because "every young conductor has to be ready to play these," and also because it's an opportunity for new audiences, drawn by these free performances, to hear essential repertory.

At the rehearsal, pianist Sejoon Park, 17, and the orchestra play a Grieg phrase as Sidlin counsels the conductor, Christopher Whiting of San Francisco. "Do very little and breathe a lot, and you'll get the right sound." Sometimes he encourages: "You solved a big problem and you did it beautifully." Later, to Whiting: "It's the third 'bum' where he rushes," Sidlin says of Park. "Don't tell him not to rush — he's the soloist." Chuckles from the musicians. Sidlin adds: "This is for all conductors: Don't obsess. You know all the music, inside and out, backward and forward. You have to trust your instincts. When you don't trust them is when it falls apart." Whiting, a violinist in the Tonhalle orchestra, conducts the troublesome passage again. This time, he nails it.

Five-minute break. Outdoors, Parisian percussionist Benjamin Levy, 28, who's winning accolades as a regional opera conductor in France, says the best thing about Aspen's program is "being mentored by conductors," he says. "It's rare to have teachers who can tell you their experiences, which is priceless. Often, conductors don't have time to teach. The second thing is David Zinman's idea that conductors should play in the orchestra. When you're a conductor, you can lose touch with reality and start to feel you're special. You learn a lot from being in the pit."

There are some things, of course, that conductors must learn on their own. What to do with the body, for instance. "I'm too much in the air," says Levy, rising on tiptoe and conducting an imaginary orchestra. "People involved in music get sucked into moving the body, like you're in a disco. You're not here to enjoy yourself," he says with a smile, obviously enjoying himself, "you're here to show what you want, to make sure that the gesture you're sending is the gesture that will be received. But in an orchestra it's not as immediate. That's why you have to have feedback from a teacher."
The Tale of the Tape
To Zinman, videotaping's valuable. "You show them what's not communicating to the orchestra and what's counterproductive." Zinman, a golfer, says it's like teaching someone to swing a club. "They'll watch and say, ohmigod, I didn't give the upbeat, or ohmigod, I'm just talking on and on, and look at their faces, they're bored to death." Gesturally, says Zinman, there are moves that are standard. "Have you ever seen the Italian, Portuguese, or Spanish traffic cop?" he asks. And then, "Every conductor has personal idiosyncrasies. Some are deliberately unclear, like Furtwängler. Some just close their eyes, like Karajan. Some are very precise, like Fritz Reiner, very strong and powerful. The personality affects the gesture. It comes out of what he wants to hear."

That's not always easy. "A great orchestra," says Gaffigan, "can sense when there's tension in the stomach of a conductor. The orchestra can read it in the facial gestures and phrasing." 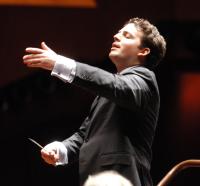 Zinman says he doesn't feel anything in particular when he stands in front of the orchestra. I have the music in my head. I have the sound I want to hear. I feel nothing. I expect to hear the sound come."

Jokes Gaffigan of his first time on the podium: "I think it would be X-rated if I told you." Then he says, "It was the vibration I felt in my body. The different gradation of colors shocked me, the vibration of the strings. I get lost in the music — those are the best performances."

"David gives us a safe place and a haven to learn our craft," Gaffigan says. "He never poked fun at our ideas, and when you're young you have crazy ideas. He teaches us to kind of shut up and conduct. The musicians may have been playing Beethoven's Fifth more years than you've been alive. It's about respecting the musicians and letting them play, and then correcting anything you want to correct. Conducting is an art of collaboration, not a dictatorship. It's making music together and breathing together."

Says AMFS chief Fletcher, "Mr. Zinman is particularly thoughtful and analytical about how conducting works," and he passes that insight along. "Recently a young conductor was leading Barber's Second Essay for Orchestra and the bass drum didn't play a note," Fletcher recounts. 'What happened?' Zinman asked the student conductor. 'He missed a note, and I didn't tell him,' the student said. Zinman said, 'If you were conducting the Berlin Philharmonic, you would just look at him, and he would know, and you would know he knew.' "

It's fun to look at the conductors in succession, movement by movement, on the podium. They're like snowflakes. No two give a downbeat in the same way. Some are by turns impassioned, joyous, even pained, while others seem to be striving for a pleasant, even-tempered, I've-got-your-back mien. James Feddeck embodies the latter qualities. At 23, he exudes maturity and composure. From Scarsdale, N.Y., he's the new assistant conductor of the Memphis Symphony, and this is his second summer at the conductors' academy.

The atmosphere, he says, "seems to be pretty supportive. The message comes from the top down. It's really the influence of Mr. Zinman and Mr. Sidlin. They encourage us to understand that we're going to all be in the same business together for a long time.

"They really take a leap of faith in trusting us with the orchestra," he says. When Feddeck's playing, he's an oboist. When he's conducting, "So much goes on mentally, it's just a matter of trusting yourself and the orchestra. Sometimes when you try less, you get more."

How does it feel to have all that talent, all that sound, all that power, at your command? Feddeck thinks it over. "I remember the first time I drove," he says. "I was thinking about the gas, and thinking about the brake. But at a certain point, you have to let go and just drive. And at a certain point," Feddeck says, as the musicians, back from their break, launch into the Eroica, "you have to let go and just make music."