The wistful lyrics from West Side Story must have had a special meaning for David Gockley as he contemplated the lack of appropriate performance venues in the city. It was a couple of years ago, and Gockley had just arrived as the new general director of San Francisco Opera. Among the first questions asked of him was whether he'd be interested in reviving the company's old Spring Opera Theater. The answer was an instant "yes," clearly indicating that Gockley is among the many fans of the low-cost series featuring young talent in the 1960s and '70s.
The problem, Gockley said at the time, was that he couldn't find a medium-sized hall with stage facilities. Spring Opera used the Curran Theater most of the time, but the Best of Broadway series has made that venue unavailable. 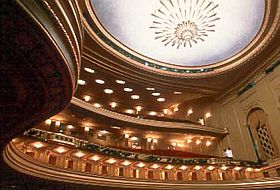 Gockley told San Francisco Classical Voice last week that the search continues:
The Opera would greatly benefit from the availability of a 900-to 1,200-seat proscenium/pit theater during certain weeks when the Opera House is unavailable and when we want to present something on a smaller scale. A renovated Herbst Theatre, in the Veterans Building, could fill the bill, but only if other current users of Herbst get a new facility nearby — a recital/lecture hall, something like Lincoln Center's Tully Hall — that's less expensive to build than a small opera house as it won't require a pit, large stage, and fly tower.

Fixed up and without the demand from all groups, Herbst could serve the Opera, and other organizations needing a fully functioning theater. Organizations producing recitals, lectures, and concerts may prefer the new hall, but in any case would still have a choice. 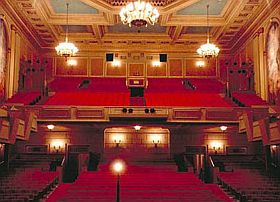 Similar dilemma, different players and requirements: The Left Coast Chamber Ensemble and several other groups are stuck in the Veterans Building's Green Room, a hall with unacceptably bad acoustics. True, one floor below, there is the excellent, chamber-music-perfect Herbst Theatre, but it's a bit too large (916 seats versus 300 in the Green Room) and definitely too pricey for small organizations to rent.

"There are a thousand stories in the city" about finding the right performances place for the right price, even though the situation today is far better than it has ever been. Consider that until the 1980 opening of Davies Symphony Hall, all three of the city's major music organizations — the Opera, the Symphony, and the Ballet — shared a single venue, the War Memorial Opera House.

Originally, Davies seated 3,000, but after it got a major acoustical fix in 1992, capacity dropped to 2,743. The 1932 Opera House, which underwent a $86.5 million seismic reconstruction in 1997, seats 3,146, and has 200 standing-room spaces. The Opera and the Symphony are the main users of the Harold L. Zellerbach Rehearsal Hall, adjacent to Davies Hall, a uniquely configured, large space, which can accommodate up to 300 people. 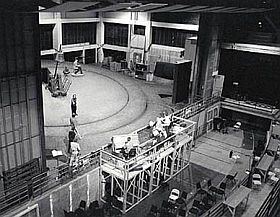 (Want to put on a show? You should be, or have, both an accountant and an attorney to figure out the cost of renting a hall, paying personnel, coughing up for insurance, and the like. See if you can figure out what it takes to rent the Opera House for a night.)

More recent developments, resulting especially from a veritable explosion of new and rebuilt museums around town, have radically changed the inventory of performance spaces, and there is more to come. Here's a chronological list of those mushrooming venues (excluding churches and schools, which would require a whole other survey): 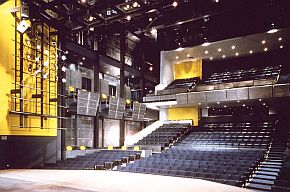 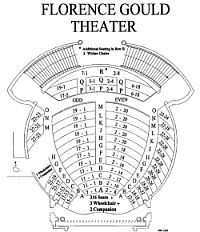 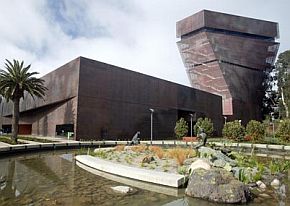 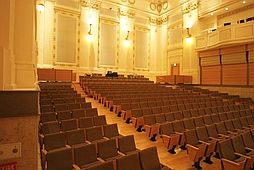 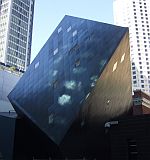 Outside and inside the Contemporary's cube

The Future, Near and Far, Real and Possible 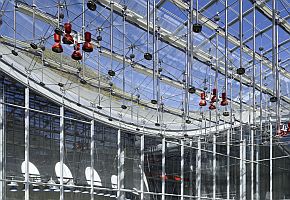 A segment of the California Academy of Sciences' all-glass piazza 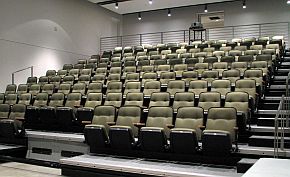 One configuration of the California Academy of Sciences Forum

Additionally, the Academy sports a central piazza surrounded by glass (not using columns for support), creating a huge open space and making the building transparent across its East-West axis. And, if the city ever produces an underwater opera, there could be no better place for it than the Academy's new Steinhart Aquarium, a dumbfounding combination of indoor tropical rainforest, coral reef, California's coastal ecosystem, a new perspective on the Amazon river, a crocodile-filled swamp, and a "Costa Rican Butterfly Canopy" full of free-flying butterflies. Come to think of it, it's a place entertaining enough without opera.

Of Landlords and Earthquakes
The owner/operator of performance spaces in the Civic Center is the San Francisco War Memorial and Performing Arts Center. The center comprises the War Memorial Opera House, the Veterans Building (including Herbst Theatre and Green Room), Louise M. Davies Symphony Hall, Harold L. Zellerbach Rehearsal Hall, and the Memorial Court — over an area of 7 1/2 acres.

Location of the Performing Arts Center overlaps with the Civic Center's many major buildings, such as City Hall, an old and a new State Building, several court buildings, city and state offices, along with the San Francisco Ballet Building, the Bill Graham Civic Auditorium, the new Main Library, and the Asian Art Museum that supplanted the old library building, the Conservatory of Music's new headquarters, and so on.

In yet another overlap — of a most complex nature — the $1 billion federal-state-city-business-individual seismic upgrade project involves both the Performing Arts Center and other Civic Center buildings. Thus multimillion-dollar seismic retrofits have applied equally to the Opera House (PAC) and City Hall (CC) through multiple-entity organizations without clearly discernible top leadership. In spite of the strong potential for chaos, retrofitting has been an unqualified success, preserving the Opera House's acoustics, City Hall's classical architecture, and so on, while modernizing facilities, and making the buildings safer. 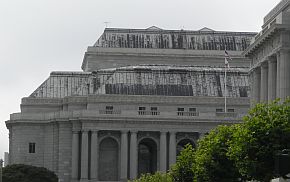 No fiddler on these roofs

Against this good-news story, which I have followed closely for the past two decades, there was an unexpected sight just this Sunday, as I idly surveyed this heart of the city. High in the sky, there! not a bird, not Superman, but rust and decay, on both Opera House roofs (one over the auditorium, the other over the fly tower), in stark contrast with the excellent condition of the new and renovated buildings. Considering that the city has gone without rain for some six months now, I wonder what might have mottled those roofs. And, a related question: What will happen once the much-delayed, hoped-for rains do arrive?