Il trovatore isn’t Verdi’s most popular or frequently performed work, but for many opera lovers (this reviewer included) it’s always been impossible to resist. With its distinctive tinta, vigorous orchestral score, and blend of seething passions — for love, revenge, and a dark assortment of cruel punishments — it’s easy to see why this opera often emerges as the Verdi aficionado’s melodrama of choice. In an ideal setting, it can burn with intensity like no other. 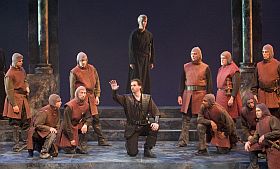 For various reasons, Festival Opera’s new production, which opened Saturday in the Hofmann Theater at the Lesher Center for the Arts in Walnut Creek, never thoroughly caught fire. Uneven casting and unimaginative stage direction were the principal problems that conspired to rob the 1853 score of its wonted effect. But there were flashes of brilliance and one impressive role debut in the two-hour, 40-minute performance (with one intermission), which is scheduled for three repeats, through July 20.

More than one stage director has come to grief while negotiating the labyrinthine Salvatore Cammarano-Leone Emmanuele Bardare libretto, based on the 1836 play, El trovador by Antonio Garcia Gutierrez. Credit director Giulio Cesare Perrone for achieving a measure of clarity, both in the milieu (15th-century Spain) and central relationships. (Leonora, a noblewoman, is loved by two rivals, the Count di Luna and the rebel knight Manrico, both of whom are mysteriously tied to the Gypsy hag, Azucena.)
Light But No Heat
What Perrone hasn’t managed to do is give the production a particular point of view, or a palpable sense of dramatic urgency. The director, also serving as scenic designer, has contributed a no-nonsense set of columns and wide steps, augmented by several large pieces — a single tree branch, a metal ram’s head — that drop into view. The scheme is efficient and attractive, and costumes (by Susanna Douthit) and lighting (Matthew Antaky and Patrick Hajduk) supply a burnished glow.

Yet the action onstage never feels terribly authentic. If this is Spain at war, only the swords hint at it. The laconic poses for the chorus in particular suggest an afternoon at the spa more than the battlefield. The best one can say about the way the director moves his cast around is that it’s straightforward.

With a dream cast, this would be enough; Verdi’s score boasts sufficient heat to melt a polar icecap. And Music Director Michael Morgan conducted with rhythmic drive, if not always exact precision. But the singers rose to the occasion only intermittently.
Superb Tenor
The exception was tenor Noah Stewart, who impressed all evening in the title role. Assuming the first Manrico of his career, the former participant in the San Francisco Opera’s Merola and Adler fellowship programs was a sturdy, resonant hero. Stewart’s spinto voice is large, bright, muscular, and well-supported throughout his range. His characterization of the troubadour was a bit one-dimensional, but his singing was always splendid. A gorgeous “Ah! si, ben mio,” followed by a compelling “Di quella pira” (The horrid flames of that pyre) were the evening’s decided high points. 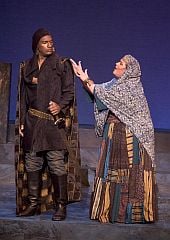 Soprano Hope Briggs, singing the role of Leonora, didn’t fare as well. Briggs, who was the Amelia in Festival Opera’s 2005 production of Un ballo in maschera, brought regal bearing and a richly colored, lustrous instrument to this assignment. Saturday, she launched into the “Miserere” with strength and conviction. Yet she lacks the smooth Italianate phrasing and gleaming top notes the role requires. Throughout the performance, she exhibited strain and an unpleasantly acidic edge at the top of her range. 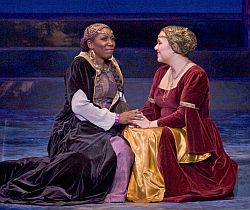 Hope Briggs (as Leonora) and Jessica Mariko Deardorff (as Ines)

As Count di Luna, Scott Bearden also seemed overmatched, particularly in the first half, where his large, imposing baritone sounded halting and shapeless. Bearden recovered somewhat after intermission, and sang handsomely in his final duet with Leonora. Mezzo-soprano Patrice Houston was a winning Azucena, singing of the murderous mob with strength in “Stride la vampa” (The flames are roaring), matching Stewart for beauty and tenderness in “Perigliarti ancor languente” (You must not risk your life while still weak) and sounding the dramatic depths of the dungeon scene. 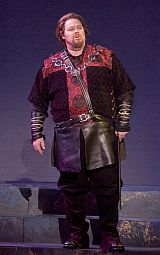 Bass-baritone Kirk Eichelberger offered aptly dark, rock-solid vocalism in Ferrando’s narrative. Jessica Mariko Deardorff was an articulate Ines, and Alex Taite was a sturdy Ruiz. James Toland’s chorus sang well, although I might have wished for greater unity and fervency in attacks. Morgan’s ensemble, though, sounded fully committed. There were moments in the orchestra’s playing — and in the beauty of Stewart’s singing — that transcended the production’s shortcomings, reminding us once again why Il trovatore will always deserve a place on any list of Verdi masterworks.