Santa Fe Opera is presenting its first Billy Budd this season. The company, which was founded just five years after Benjamin Britten premiered the first version of the opera in 1951, waited an inexplicable five decades to stage this haunting 20th-century masterpiece. Yet the new production by Paul Curran (seen Friday), which features superb music direction by Edo de Waart and a vibrant cast headed by Teddy Tahu Rhodes in the title role, makes it worth the wait.
The composer's two-act, 1960 revision receives a strikingly theatrical setting in Curran's staging. The director and his design team succeed in evoking both the external horrors of life in 1797 aboard the British man-of-war the Indomitable and the internal dramas of its principal characters: Vere, the ship's captain; Claggart, the sadistic master-at-arms; and Billy, the beautiful young seaman whose innocence proves his undoing. 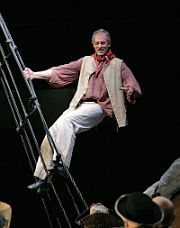 The excellent set, by Robert Innes Hopkins, gives the audience a long view of the Indomitable, with a sloping, handsomely rigged deck intermittently raised to reveal the grim, overcrowded conditions for the men below. Hopkins also contributed the costumes, which clearly delineate the class and rank of those onboard, from the captain down to the lowly — and vigorously protesting — conscripted men. Rick Fisher's lighting design adds invaluable atmosphere, especially when augmented by extratheatrical flashes of New Mexico lightning, glimpsed around the perimeter of the 2,200-seat, open-air house. 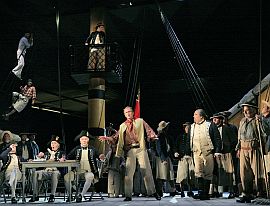 The set of Billy Budd

Adapted from Herman Melville's novella, with a libretto by E.M. Forster and Eric Crozier, Billy Budd exerted a powerful effect on Britten's creative imagination. The themes that occupied the composer throughout his lifetime — the corruption of innocence and the persecution of an outsider by an unfeeling society — are embodied in Billy, a good-natured orphan pressed into service. Despite a crippling stammer, the character adapts to sea life quickly, emerging as both a natural leader and a loyal supporter of Vere, to whom he swears his undying allegiance.

He's the quintessential innocent, and a likable optimist. Why, then, does Claggart despise him? The generally acknowledged (though not by Britten) reason is repressed homosexuality: Claggart is sexually attracted to Billy, and must therefore destroy him. For the most part, Curran skirts the issue; if his stage directions don't contradict this assumption, they don't overtly support it, either. Here, Claggart is merely evil, in the manner of Iago; the generalized inhumanity of 18th-century naval life must suffice for motivation. In the Act 1 flogging, with a bleeding Novice carried onstage after receiving 20 lashes for a minor offense, it seems explanation enough.
Marvelously Rich Score
This barren, all-male atmosphere makes the richness of Britten's score seem all the more miraculous. As with his earlier masterwork, Peter Grimes, the composer fused time, place, and moral ambiguity into a deeply affecting musical drama. De Waart, well-known in the Bay Area for his years (1977-85) as music director of the San Francisco Symphony, and recently appointed Santa Fe's new chief conductor, led a taut, shapely performance. The writing for orchestra and chorus sounded thrilling, and the cast brought the characters to life with mordant clarity. 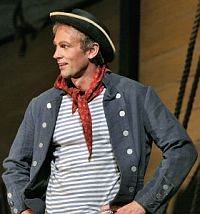 In the title role, Rhodes scored a triumph. Making his company debut, the New Zealand native sang forcefully and moved with athletic grace. Tall and rangy, Rhodes bounded up the ship's rigging with the kind of virility that gives new meaning to "able-bodied," and his distinctive baritone emerged with strength in ensemble numbers such as the lusty "Blow her away." Yet it was the ballad "Look! Through the port comes the moonshine astray," sung with fresh, beautifully sustained musical line, that elevated his performance to the level of enduring artistry. 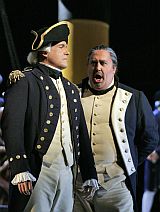 William Burden as Captain Vere and Peter Rose as Claggart

William Burden, who made a strong impression as Tom in the San Francisco Opera's production of The Rake's Progress last fall, invested the morally conflicted Vere with ringing tone and unwavering dramatic focus. Bass Peter Rose has the aptly dark, resonant tone for Claggart, and he delivered his extended aria ("Oh beauty, oh handsomeness") with malevolent fury.

The supporting cast was outstanding. Jeffrey Behrens made an articulate Squeak, and Keith Jameson was an indelible Novice. Thomas Hammons was a Dansker steeped in humanity, and John Duykers was a characterful Red Whiskers. The officers — Richard Stilwell as Redburn, and John Stephens as Ratcliffe — emphasized the humor of "Don't like the French" and the gravity of the trial scene. Lucas Meachem's Donald, Matthew Tuell's Maintop, and Timothy Nolen's Flint made fine contributions.

The men of the chorus, prepared by Susanne Sheston, sounded robust in battle ("This is the moment") and potent in the execution scene, their anguished cries rising up to where the hanged man was viewed in silhouette behind a giant sail. Throughout, de Waart supported the singers well, lending turbulence to the sea music and a poetic glow to the lyrical passages for Britten's tormented hero.