The didactic imperative runs deep, if gentle, at [email protected]. Every season and indeed every program boasts a design, one calculated to make the audience hear anew, or differently, or both. But throw a roster of musicians of the [email protected] caliber together on programs, and the lessons you planned for your listeners might not be the only ones they learn.
"Classical Bookends: Haydn and Schubert" was the title of the second evening [email protected] program, and meant no more than that Haydn and Schubert stood at opposite ends of what we've come to call the "Classical Period" in music. But Wednesday's recital at St. Mark's Episcopal Church in Palo Alto was also a lesson in chamber-music playing. It culminated in the best performance of Schubert's massive Octet that I've had the privilege to hear, but to get there you had first to hear a cautionary tale.

The Escher String Quartet's Haydn "Sunrise" Quartet (Op. 76/4) — impeccably played and obviously minutely prepared — was still about the most vexing performance of anything I've heard in many years. The Eschers refused to let anything alone. The tempo changed every few bars. Coy little pauses came in between chords or phrases, to be repeated every time the material came back. Every expansive gesture on the composer's part pulled the music to a halt, while anything suggestive of motion caused a wild lurch forward.

At bottom, it boiled down to mistrust — of the composer, of the music. Haydn alone couldn't be expected to hold the audience's interest, so Haydn had to be elaborated bar-by-bar, tweaked, alternately goosed up and relaxed back down. Massage the music methodically into a series of vivid images, and it might suffice to compel attention.
Trying Too Hard
For what it's worth, the Eschers' Haydn certainly compelled mine. The thing was fascinating, perplexing, and irritating in equal parts, though the more I listened, and the more I thought about what I heard, the more that irritation got the upper hand. I do understand what the Eschers were likely reacting against. Hear enough plush, comfortably upholstered, complacent Haydn, and you too will feel the urge to make it eventful at all costs, if only to convince your listeners that it is such interesting music, dammit.

But, no, you can't go about it this way. Wash out the continuity in Haydn, and you've inadvertently rubbed out a big chunk of the content. Remove the sense of a tempo and of a metrical framework, and it doesn't much matter how elegantly crafted your rhythmic inflections may be — you're still trying to swim in the absence of water, gesturing without anything to push against.

The whole point of the first movement of the "Sunrise," for one thing, is that the leisurely, almost languorous opening of its "dawn" proceeds at the same speed as the broad daylight a couple of dozen measures further on. The steady motion doesn't change; only the activity and, as it were, the illumination do. Beneath everything from the start is an Allegro tempo, rushing forward even where the notes themselves don't. My husband summed up the Escher first movement more pithily than I can: "This isn't a sunrise," he said; "it's someone looking at a picture of a sunrise."

And it was the same throughout the Escher performance: constant rhythmic finickiness and tempo fickleness, a pervasive drawing of attention to present events combined with a horizon that never, by any chance, got further than two or three bars away. Only at the end of the finale — the one place where Haydn actually licenses a tempo change, writing in several levels of accelerando — did the Eschers sound like they'd at last arrived at a groove, even if they funked it in the end by delaying the final chord.

What made all this doubly frustrating, of course, was the quality of the playing as playing. The Eschers are a technically formidable quartet, not as individual in terms of collective sound as some young ensembles but strong, well-balanced, and rehearsed into a frightening unanimity. (Indeed, a little less fantastic ensemble technique and I doubt they could have accomplished some of their more annoying tempo jolts without falling apart.)

Would that the players had taken a lesson from the ensemble that preceded them on the program: pianist Derek Han, violinist Jorja Fleezanis, and cellist Laurence Lesser, playing the E-Minor Haydn Piano Trio, Hob. XV:12. Haydn's piano trios aren't quite the indestructible things that his quartets are. They suffer, for one thing, from being not quite "chamber music" in the modern sense, but rather piano sonatas with string accompaniment. And the cello parts, designed to reinforce a piano left hand that, on a modern piano, doesn't need the help, tend to sound especially outsized.

But actually Lesser, big and bluff and "modern" though his tone is, never sounded out of place. Nor did the incisive Fleezanis, and Han was as nimble and witty as you could wish. To someone with ears still full of good "period" performances, this one did seem a shade standardized in inflection. But the Eschers following put that swiftly in perspective. I'll take the Han/Fleezanis/Lesser basic confidence in the text over the Eschers' anxious gussying-up any day.
Superlative Octet Performance
Yet the performance of the Schubert Octet after intermission blew all such either/ors right out the window. This longest of Schubert's chamber work (which, as string players will know, is saying something) tends to get great performances when it gets any at all. Maybe it's because, with so rare and inconvenient an ensemble, every performance is a special treat. Maybe it's because the music itself seems to compel you to play it the only way it can rightly go. Probably both. 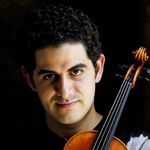 Anyway, in this performance, everything did go right. The players got a standing ovation and many ensemble bows. But individual bows is what they properly deserved. In my book, first violinist Arnaud Sussmann gets one for the deftest and yet most modest playing of that wicked part I've ever heard; Fleezanis, for never, ever sounding like someone playing second violin; Hsin-Yun Huang, for the freest and most uninhibitedly joyful viola playing this side of Geraldine Walther; Andrés Díaz, for the most calmly mellifluous high-register cello playing I've heard in years.

And bassist DaXun Zhang, for grounding everything with unmatchable authority; Anthony McGill, for being certainly the suavest clarinetist I've heard negotiate the finale's triplets, not to mention everything else; bassoonist Dennis Godburn for reedy goodness above and beyond the call of duty; and William VerMeulen for horn bravery up to and including that gratuitously nasty penultimate bar of the fourth movement.

All the same, it was as an ensemble performance that it was magnificent. Everyone seemed of one mind, and the ensemble danced and sang with the sort of naturalness that comes out in motion (at times the players even seemed to sway as one body) without either seeming or being choreographed. The winds deserve special praise for sounding in their combined music as though they were all playing the same instrument. But in truth the whole band sounded that way; it was a glorious ensemble sound.
Mystery Solved
One moment in the finale, incidentally, jerked me to sudden attention, and when I tried to find out why, the trail led to an interesting place. The finale opens with a dark, portentous introduction, all tremolo cello and wind calls, and right before the work's end this music comes back. Added are some filigree things in the first violin, arpeggios upward and then repeated quick notes. As Sussmann played these, there was a leap far upward at the end of the arpeggio, and the repeated notes lay at the top of the violin range, higher than I remembered. It was a wild, eerie sound.

Well, I went and checked my score: no such jump. Then recordings. There I found that a modern period-instrument recording (Mozzafiato and L'Archibudelli — with, incidentally, Dennis Godburn as bassoonist) had the jump, but only after the first bar.

A more recent edition, maybe? Aha: The Bärenreiter edition (derived from the Neue Schubert-Ausgabe, or "New Schubert Edition") bears the marking "8va" (one octave higher) for all those repeated notes, but only after the first bar. Sussmann obviously thought that sounded silly (I'm with him there) and played the first bar the same way.

But where did Bärenreiter get its "8va"? We're in luck: Anyone with Internet access can look at Schubert's manuscript here and see what must have happened. Schubert writes out the eight repeated notes in the first violin at the top of the page; in the next bar, on another system of the score, he just puts three slashes through the stem of the note and an "8" on top of it, to signify eight separate strokes. The "8" means "play eight notes in the space of this one larger note," not "play this an octave higher." But that's not what got into Bärenreiter's critical edition ... which is what players anxious to get a reliable text will be using.

The irony here is that, while Schubert's (posthumous) 19th-century editors had no difficulty deciphering the notation on that page, they did have trouble believing that a violinist should be made to perform the gymnastics Schubert takes his first violin through earlier in the same movement — so the earliest editions of the work have a "rhythmically simplified" (read: bowdlerized) first violin part, with a clarinet part to match. Nowadays the easily available editions of the piece restore the octaves 'n' triplets mayhem that the first edition cut out, but it took a modern critical edition to add an error the bowdlerizers neglected to make.