The Midsummer Mozart Festival's first foray into opera, a production of The Abduction from the Seraglio at San Jose's California Theater, was highly successful in most respects. The singers ranged from capable to excellent, with one standout. The orchestra, under George Cleve, was in fine form, and the production, though billed as semistaged, was brilliantly directed and full of comic verve. The only big mistake came on the administrative/ managerial end. 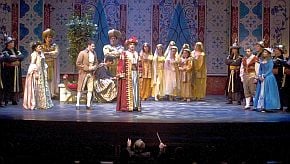 A scene from Abduction, with George Cleve conducting

The box office line in front of the California Theater last Saturday stretched for a full block, and moved at a snail’s pace. I found out that the box office was staffed with a single person, serving both the will-call window and ticket buyers. Tensions grew among the crowd as the 7:30 curtain time came and went, while the vast majority of the audience still stood in line outside. Surely, we thought, they would hold the downbeat until more people were seated.

We were wrong, because the overture began promptly, despite a nearly empty auditorium. Audience members were shown to the otherwise unused balcony seats for the first act, and were subjected to sarcastic jibes from theater staff about “late arrivals,” despite the fact that most had gotten to the theater nearly an hour prior. But the annoyance gradually faded in the face of Mozart’s delightful opera.

I have heard it said that George Cleve goes with Mozart as perfectly as chocolate does with peanut butter, and from the few minutes of the overture that I heard to the end of the show, that was certainly the case. His Festival Orchestra, made up of members of the Bay Area’s best ensembles, played sensitively and cohesively. The score’s more raucous moments, which imitate Turkish infantry bands, were dazzling, and gleefully rhythmic, while more emotional moments sounded sweet and tender.
Terror of the Entrance Aria
The singers in The Abduction from the Seraglio face challenges from the moment they step onto the stage. They must, in most cases, enter and immediately launch into fiendishly difficult arias. Indeed, two of Mozart’s most devilish creations, the lament “Ach, Ich Liebte” (Ah, I have loved!) and “Durch Zärtlichkeit” (By tenderness and flattery) occur right as the characters appear.

Isaac Hurtado, as the Spanish nobleman, Belmonte, was the first to be subjected to this hurdle, as his aria opens the first act. Hurtado certainly looks the part of a passionate young lover, but he acted and sounded somewhat unsettled. It wasn’t until his Act 3 duet with Konstanze that he appeared fully comfortable and musically secure. 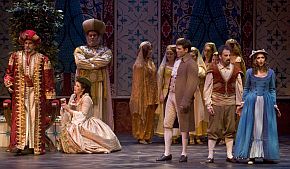 A scene from Act 3

Christina Major fared better as Konstanze, Belmonte’s kidnapped lover. Although the middle high notes of her first aria sounded murky, her top C’s and D’s sparkled. Her extended scene in Act 2, in which she outlines her great sadness at being separated from her beloved, was far more grounded and comfortable. Major seemed to have trouble deciding what to do with her hands, however, and several times settled on awkward gestures that detracted from her character’s emotions.

The hardest of the difficult entrance arias, perhaps, belongs to Konstanze’s maid, Blonde. The second act opens on Blonde, who uses coloratura and three high F’s to admonish Osmin, her would-be seducer, for his bad behavior. Soprano Khori Dastoor hit the character, and the notes, dead on. Blonde’s second aria, “Welche Wonne, welche Lust” (What happiness, what delight), which is as unrelenting and demanding as her first, was bright, funny, and well-paced. Her energetic portrayal of the feisty maid called to mind Betty Hutton in the 1950 film, Annie Get Your Gun.
Flair for Comedy
Belmonte’s servant Pedrillo has also been kidnapped and imprisoned in the Turkish harem. Without an opening aria to negotiate, tenor Matthew O’Neill made his mark with a keen sense of comic timing. His singing was overly tense, though, as if he was struggling to be heard over the orchestra. He rallied, though, for his Act 3 serenade, which had wonderful clarity and simplicity. 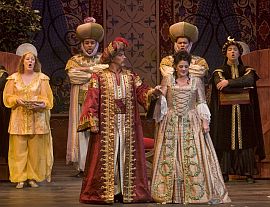 The harem’s owner, Pasha Selim, does not sing. In this speaking role, William Neely used his operetta and musical theater experience to shine as the commanding and stern, but ultimately fair, lord of the Turkish manor.

The star of the evening, however, was Jeremy Galyon. His portrayal of Osmin, the overseer of the harem, was at once stern, gruff, dim, and wickedly funny. His voice is full, resonant, and clear from top to bottom, without a hint of the muddiness that can sometimes plague basses. He presented finely crafted and musically sensitive arias, and stole every scene in which he appeared.

The Abduction from the Seraglio features spoken dialogue rather than sung recitative, and like many productions, the Midsummer Mozart Festival used an English translation. While occasionally somewhat stilted, it effectively communicated the situation and atmosphere. Director Barbara Heroux’s production, full of emotion, energy, and humor, often had the audience laughing out loud. Comic opera has rarely been so genuinely comical.