San Francisco mezzo-soprano Kelsey Lauritano’s friends and family, along with thousands of arts fans across the nation logged on to their computers Monday night, Jan. 9, to hear her voice streaming live from the stage of YoungArts in Miami, FL. Lauritano was selected from a pool of 7,000 applicants for the week-long program, organized by The National Foundation for Advancement in the Art. The gathering invited the nation’s most talented teens in nine disciplines (cinematic arts, dance, jazz, music, photography, visual arts, theatre, voice, and writing) for a showcase of performances, master classes, workshops, and interdisciplinary events, assembled to both inspire emerging artists and to raise the appreciation for, and support of, the arts in American Society. Additionally, each year, 20 YoungArts finalists are named U.S. Presidential Scholars in the Arts.

Says Kelsey, "YoungArts week has been like a nonstop roller coaster ride, full of excitement and thrills! Although it's only the beginning of the week, I already feel like I've experienced a years worth of an artist's heaven. Every artist here is filled with copious amounts of talent and passion, which is pushing me to work harder than ever before. YoungArts week is an inspiration like no other and I an unbelievably grateful to be experiencing it with some of the most esteemed young artists in the nation!" The bubbly senior attends the Ruth Asawa San Francisco School of the Arts and will pursue musical studies in college or Conservatory next fall. Watch for her in the finals of the Classical Singer competition in Chicago in May, and the finals of the Mondavi Center Young Artist’s Competition in March.

Kudos to all of the Bay Area participants:

Technology has made many things easier in our lives, and it’s even impacting how we experience all styles of music. Naturally, we’ve embraced digital forms of music delivery as listeners. Now innovative teachers like Matthew Montfort are using technology to enhance the options for studying music. Montfort offers private lessons on a variety of instruments from the guitar to some really unusual plucked instruments, through Skype from his studio in San Rafael.

Singing on the Other Side of the World 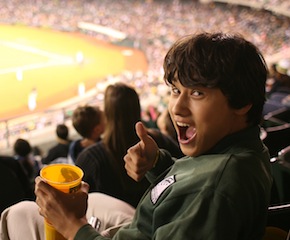 Connor Choi, a recent graduate of Oakland’s Pacific Boychoir Academy, is just now getting settled in his new home, halfway around the world at the Drakensberg Boys Choir School in South Africa. Classes start for the boys on Jan. 15, at which point Connor will become the first American to attend the prestigious school, studying and singing in the choir along with the other ‘Drakies.’

The two schools are similar — both offer excellence in academics, with an emphasis on choral training and leadership, and both schools have collaborated on concerts and hosted each other during tours in the past. Choi will be the first student to pilot an exchange program, venturing boldly, far, far away from his family and home to take classes in Afrikaans, and immerse himself in the African songs for which the choir is well known. “I’m nervous but I’ve been there before and have friends there already,” said Conner. “I’m excited to become one of the ‘Drakies’.” He’s also interested in learning to play Cricket, the school’s sport of choice. Drakensberg Boys Choir School is nestled far into the Champagne valley, a six-hour drive from the nearest city. The student body reflects the multicultural population of South Africa.

Kevin Fox, Choi’s director in Oakland says: “This is a once-in-a-lifetime opportunity for Conner. He’s a fine singer and leader. We will miss him, but we’re all very excited for his adventure.” A sentiment his very supportive parents echo as well.