Two groups with like-minded ideals visited Stanford University last week. Imani Winds and Miami String Quartet compelled their modest-sized audience in Dinkelspiel Auditorium to join them on a spirited and inspired, if unfamiliar, musical journey. From the first to the last sounding notes both ensembles played brilliantly, with vigor, dedication, and flair. The caliber of musicianship was only part of the remarkable artistic parcel on display Wednesday night. Most impressive was the collective grace emanating from the players from the moment they walked on stage, which then lingered in the hall, like warmth, well after the concert’s end. 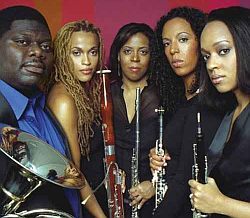 Like a few other chamber groups, Imani Winds is not afraid to call a new tune. The Grammy-nominated quintet, in existence now for over a decade, is known and prides itself on bringing little-heard and overlooked music to the concert stage. Notably, the quintet is also committed to the music of composers of diverse (read: underrepresented) cultural backgrounds. African-American, Afro-Latino, Latino, and Asian composers are championed in Imani Wind’s repertoire. The group traverses boundaries, too: They will help celebrate famed saxophonist Wayne Shorter’s 75th birthday in December with a collaboration at Carnegie Hall, and this is only one example of the ensemble’s musical synthesis. They and the program’s presenter, Stanford Lively Arts, are kindred spirits.

The collaboration between Imani Winds and composer-in-attendence Roberto Sierra, Concierto de Cámara (2008) for wind quintet and string quartet, embodied a mutual deference. Sierra’s virtuosic work contrasts large, gashing gestures spanning the instruments’ range with tight tonal clusters, simultaneously refuting and reinvestigating the intimacy of chamber genres. Clearly Sierra envisioned his piece as a concertante, with the ensemble opposing each other. But the ultimate effect of each of the four movements was aggregation, each ensemble reinforcing the timbral uniqueness of the other.

Concierto allowed both ensembles to work in tandem, through a variety of sonic textures and musical affects, without homogenizing. Its last movement — perhaps the most stimulating musical moment of the evening — featured a recognizable, fleeting, Habanera rhythmic motive that was both transparent and macabre. A punctuated, dissonant, and loud montuno pattern, traditionally played by the piano in son montuno and salsa bands, demanded a listener’s attention at the piece’s peak, ending while we sat contemplating the conviction of the performance.

Valerie Coleman was in top form, superb in the beautiful flute cadenzas of Alberto Ginastera’s Impressiones de la Puna for flute and string quartet, and in the high flurries of Villa-Lobos' Quintette en forme de Chorros whose references to the Brazilian folk music implied by the title appear refracted through a Second Viennese School prism. Coleman also contributed an original piece, Des Films Epiques played by the full nonet, where lyrical and energetic writing is dancelike but careful, as if the dance were held on a tightrope. In Contrabajissimo, a charming Astor Piazzolla number arranged by hornist Jeff Scott with his bassoonist in mind, the ebullient Monica Ellis led the ensemble with gusto. Coleman beamed at her in response. 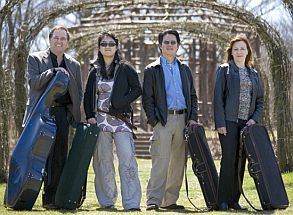 The Miami String Quartet was also in excellent form, particularly in the choleric sections of Joan Tower’s String Quartet No. 4, “Angels.” Violinist Benny Kim played confidently in Tower’s quartet, and swayed along with Coleman in a delightful duo in the last movement of the Ginastera.

A member of the audience, overheard as she left the hall, concluded that the music that had just been played was different than what she had heard before. Indeed, an unusual ensemble brought off an unusual program. But let’s note that neither the audience’s diversity nor the social and cultural mission of Imani Winds interferes with their high level of artistry. Those factors only make their artistry sound louder.