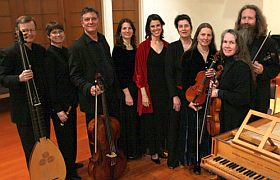 Every musician searches for masterpieces to bring to the stage. For two decades, Magnificat has been in pursuit of such creations to please Bay Area audiences. Luckily, it has narrowed its focus to the 17th century, a time bursting with dynamic composers and emotional works.

“It’s a tribute to the audience in the Bay Area that a group could focus on repertoire from the 17th century and be successful and have a following,” explains Artistic Director Warren Stewart. “That’s a joint effort between Magnificat and the audience.” Stewart, an accomplished cellist, has dedicated the last 20 years of his career to early music. His love of Baroque music is evident in the dynamic programming presented by the group each season. “It’s a fascinating time and period of music. Lots of things were changing, new rules were being written, and new kinds of music were being invented. I think it’s really fascinating to have the opportunity to explore that remarkable music and share it with the audience.“

Stewart had the great responsibility of crafting Magnificat’s 20th season. “I tried to choose composers and specific pieces that were somehow representative of what we’ve done. They are very influential composers, and they’ve shaped our style and approach to interpretation. The four composers who were featured this season were the four towering figures of the century, and represent four of the major centers where music was being created.” Although many new pieces were presented during the current season, it has been very reminiscent of the group’s first season.

“I didn’t do this on purpose, but I went through and thought about what would be emblematic or representative pieces from the century and I ended up with the same four composers that we featured in our first season, back in ’92–’93.”

This month will conclude the anniversary season with Monteverdi’s Eighth Book of Madrigals. “It is a remarkable collection of music. In a way, it is a retrospective that Monteverdi did very late in his life, that covers about 30 years worth of music. It’s transitional in the sense that they are still called madrigals, but a madrigal is very different from what the madrigal was when he first started writing them in the 1590s.” The collection is subtitled “Madrigals of War and Love.” The book is split with the first half covering poems of war, while the second explores the theme of love. “The conceit throughout is that the warrior is lover and lover is warrior, so in a way they are all about love,” Stewart remarks. “The themes that are addressed in the poetry and the way he represents them in the music are somewhat different from half to half. There are many different styles of composition represented in the book, and I tried to represent all of them, to some degree or another. The guiding principle was that kind of variety, together with the unity the composer already provides.”

Although the season is coming to a close, Stewart looks forward to many seasons of exploration. “There’s no shortage of wonderful music from the century before Bach and Handel that we want to explore. There are another 20 seasons worth of music to do.”