Beaux, which the San Francisco Ballet premiered Tuesday night at the War Memorial Opera House, shows its fabled creator, Mark Morris, awash in ideas about how cultural stereotypes limit the roles and expressive range of male dancers. Morris’ insights are right on, but they don’t generate movement that’s compelling enough to sustain Beaux. 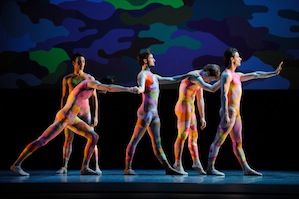 The ballet for nine men is set to the music of Bohuslav Martinu, who created this tinny harpsichord confection in 1935. In a sharp contextualization of sexist expectations, designer Isaac Mizrahi has created costumes and backdrop of pink camouflage print. Battle fatigue, however, sets in almost as soon as the curtain rises.

The chorus line of nine great dancers will break into groups to witness each others’ heroic posturing, one hand held up defensively to mean, maybe, I can take care of myself, or no, don’t speak, or perhaps, please, no feelings, we are the stronger sex. Whatever it means, it goes on for a while.

The guys deploy in airplane swoops, arms wide, or beautifully lift each other, or spin through multiple turns, or partner each other in sustained and turning arabesques. Throughout, there were strong and notable performances from Vito Mazzeo, the tallest; Pascal Molat, and Gennadi Nedvgin. 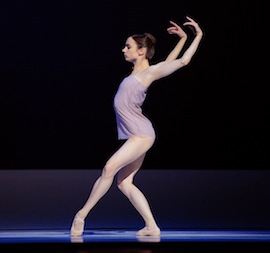 While these lovely maneuvers are taking place, other dancers are spotted, as if by chance, seated on the floor looking lonely and vulnerable. Some of their postures appear to be quotes from other master choreographers like Merce Cunningham and Paul Taylor, noted, like Morris, for celebrating the humanity underpinning the movement. As the tempo rises into folk melodies and the mood brightens, we see the vigorous cantering moves and flexed feet that are captivatingly Morris and certainly not stereotypical of anything at all.

The speed and daring of the men’s off-kilter jumps and spins gives way to a final moment of dancers standing in conversational groupings of three. You want to know more about why they’re standing that way and to care more about where they’ll go from there. Bradley Moore was the fine harpsichordist; Martin West conducted. 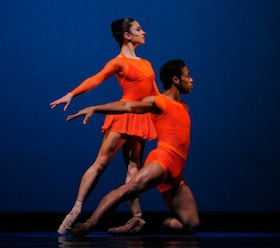 It would be lovely to be able to report that Wayne McGregor’s Chroma (2006; music by Joby Talbot and Jack White III) was more effective, but its interludes of risk and mayhem led only to distraction. The piece began promisingly, on a primal Rite of Spring note with spectacular curving bodies and a sense of suspense. Then it all went away in a flash of light (the electronic pyrotechnics were Lucy Carter’s design) and explosions of combat and surrender.

Maria Kochetkova braved the worst of the woman-as-wishbone (talk about ballet stereotypes) lifts, which looked ill-rehearsed. The drab, shape-distorting costumes made the 10 dancers look sawed-off below the torso. Again, West conducted.

Christopher Wheeldon’s 2011 Number Nine, set to music by Michael Torke (Ash), is a reliable (and Tuesday, much appreciated) thrill machine, popping its dancing platoons — four principal couples, six corps — into the air with each crescendo. Dores Andre was plush and yet precise, not an easy combination, and the other ballerinas, Sarah Van Patten, Vanessa Zahorian, and Sofiane Sylve, burnished the work’s vivacity. Wheeldon, who’s been tapped to create a new Cinderella for the company in 2013 (in partnership with the Dutch National Ballet), knows how to hold the eyeballs, all right, and there would have been even more to see if the lighting were not so muddy. The conductor was Charles Barker.