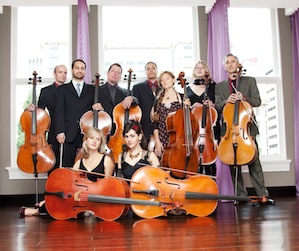 The celestial strains of Alexander Courage’s theme from the original Star Trek series opened the second half of the Portland Cello Project’s hometown concert last fall. It was an appropriate choice for a group that has taken its namesake instrument where no cello has gone before. The show opened with a lively classical piece, Manuel de Falla’s familiar Ritual Fire Dance from his 1915 ballet Love, the Magician, then was followed by an original composition by PCP’s Gideon Freudmann, an arrangement of Duke Ellington and Juan Tizol’s famous Caravan, the beloved chorus from Bizet’s Carmen (complete with audience participation), and several pieces by contemporary composers, including Osvaldo Golijov’s Lúa descolorida.

Next came what Douglas Jenkins described as “a strict canon on a theme by [hip-hop star] L’il Wayne, one of the most offensive songs in the history of man, Lollipop,” then another jazz classic and yet another classic TV theme, Paul Desmond’s Brubeck Quartet hit Take Five, yoked to Lalo Schifrin’s driving Mission Impossible theme, plus one of their early signature covers (a zesty take on Britney Spears’ Toxic), before concluding with a Pantera cover that might have been the most inventive arrangement of the evening, and another hip-hop cover, by Kanye West, one of several from their newly released album, Homage.

Welcome to the mashed-up world of the Portland Cello Project. The band formed in fall 2006 when several musically adventurous cellists in Portland, Oregon (including the Bay Area’s renowned solo performer Zoë Keating, then living there), started jamming together, and decided to find a venue where they could play classical music in public. They chose one of the city’s famed indie rock clubs — and were stunned when 200 people showed up.

After the founder moved away, the nascent group took direction from Jenkins, a skinny Hawaiian native who hadn’t picked up the cello until he entered college and who didn’t even major in music. He had played in rock bands and had started a successful Portland guitar- and cello-based band. Friends from the indie rock scene started sitting in with his ensemble, and the self-taught Jenkins proved adept at writing arrangements (over 700 at last count) of pop and classical material for a cello ensemble of 6 to 15 members.

Since then, the band has recorded four CDs; has performed with Peter, Paul, and Mary’s Peter Yarrow and with members of Portland indie rock, along with folk royalty like the Decemberists and Sleater-Kinney; has toured nationally; and even landed on National Public Radio. Its videos are racking up hundreds of thousands of YouTube hits, and the band’s growing reputation online have earned it several thousand Facebook fans and Twitter followers, not to mention invitations to play around the country. They’ve sold out shows from Alaska to Chicago, and their current two-dozen-stop tour takes them to New York, New England cities, Los Angeles, Minneapolis, Colorado, and beyond.

PCP’s four Bay Area performances this month will feature their usual eclectic mix of old and modern classical, pop, rock, and hip covers. In contrast, at their annual Portland dance parties with pop and rock singers, which invariably sell out and churn on into the early morning, “there’s crazy energy all night,” Jenkins marvels, “and it’s so fun to sing your favorite pop song and have four or five hundred people go completely wild in front of you.”

“We’re always allowing ourselves to take advantage of small opportunities that suddenly come up feeling good.”

Although no one has quit their day job (Jenkins is an English teacher when he’s not on the road with PCP), the band has done well enough to procure a big touring van, which avoids having to buy an extra seat for their instruments on plane flights. Sometimes they’re able to hire winds and brass to join the core group of a half dozen or so cellists (out of about 20 on Jenkins’ call list), but they’re careful to maintain the connection to pop music that has brought PCP a much broader and younger audience than most groups that play “classical” instruments enjoy.

“The main benefit of PCP over any symphony is that there’s no board to run ideas past,” says Jenkins, who handles most of the administrative duties, though he occasionally hires publicity and booking agents. “We’re always allowing ourselves to take advantage of small opportunities that suddenly come up, and following them is the key.”