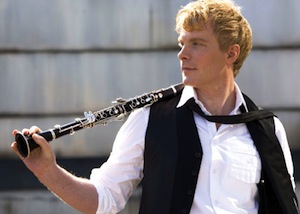 “He creates colors that make you say, ‘Is that possible with a musical instrument?’” That’s how the Los Angeles Philharmonic’s music director, Gustavo Dudamel, describes Martin Fröst, the 40-year-old Swedish virtuoso who is redefining what it means to play the clarinet. Last season, he premiered a concerto by Rolf Martinsson (co-commissioned by the City of Birmingham and Malmö symphony orchestras) and in 2012/2013 he’ll premiere a new concerto by Bent Sørensen with the Netherlands Radio Philharmonic Orchestra in Amsterdam and Cologne.

The diversity of Fröst’s discography is a reflection of his range. It includes recordings of orchestral music by Rouse, Weber, Brahms, Mozart, Holboe, Rehnqvist, Nielsen, and Penderecki, among others. In 2003, he recorded the concertos for clarinet dedicated to swing legend Benny Goodman.

When SFCV spoke to Fröst, he said he was enjoying a few weeks of male paternity leave at home in Stockholm with his wife, their infant son, and their young daughter.

When people talk about your performances, they often say you expand the dynamic of what is possible with the clarinet. Do you agree?

I think that’s true. I grew up in a small town in the north of Sweden, as opposed to a big city like Stockholm. It’s very cold and very isolated. There isn’t as much to compare with, so the chance that you can experiment and develop a unique style of your own is much bigger. I was brought up on classical music and I played the violin for a while. But then I changed to the clarinet. I was trained very hard from the time I was 14. But a lot of the way I play comes from me.

Much of the publicity surrounding your upcoming performances in Ojai has centered on Anders Hillborg’s Peacock Tales. In that piece you not only play the clarinet, you actually dance. How did that piece come about?

There were several composers in the 1970s that tried to integrate dance with playing an instrument. Boulez and Stockhausen tried it, but the dance element was fairly primitive. I thought it might be possible to create a concerto that would include real choreography. The version I will be doing in Ojai is a condensed nine-minute arrangement for solo clarinet and tape, with lighting effects. The complete work is 30 minutes long, for full orchestra. There’s also a version for strings.

A lot of the way I play comes from me.

Are you a trained dancer?

No. [laughs] It was really hard for me, because I am not a dancer at all. But after a while it came together. I worked with two choreographers. One was a modern dance choreographer from the Cullberg Ballet Company. The other was a hip-hop choreographer from a street dance company in Stockholm.

I worked eight hours a day on it, and there were times when I thought I couldn’t do it. But I never lost faith in the concept. I was 28 at the time. Now I’m 40 and I’ve performed the full version more than 300 times, though I haven’t done it much in America. The tape version I will do in Ojai is a much smaller piece, but I think it’s very effective.

You will also be performing the Copland Clarinet Concerto. Talk a little about that piece.

My first experience with the concerto was in 2003 when I recorded it with the Philharmonia Orchestra. Actually, I recorded two versions. There’s the version most people know. But there is also an original version that Benny Goodman didn’t like because it was very high. I don’t know if he thought it was too difficult. I decided to record both.

I recently played it at Carnegie Hall. The interesting thing was, there was an exhibition about Benny Goodman on at the same time, and I was allowed to try the clarinet he played. I didn’t expect it to be a very good instrument; it was old [he died in 1986] and no one had played it since then. But it was a fantastic instrument! That was a unique experience.

You said you’re enjoying having some time off. How full is your schedule?

It’s very full. I’m traveling all the time and I feel like I’ve hardly been home since my children were born. I do about 100 concerts a year that are traditional works for the clarinet. And I continue to do the Hillborg piece many times.

You obviously listen to a lot of classical music. What other types of music do you enjoy?

You’re right, I do mostly listen to classical music. But I also like jazz and folk music. And I follow what’s happening in pop. My 5-year old daughter, Matilda, is already giving me tips on what’s good. We discuss the lyrics together. It’s a very good way for her to improve her English.