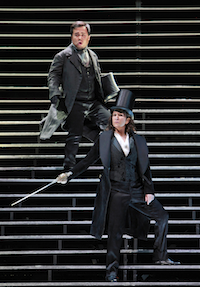 Last week, we put together the early betting line on which Merolini will make the 2013 Adler Fellows list, and when the announcement came, the speculation seemed close enough. One addition was the unusual appointment of Phillipe Sly, bass-baritone, a member of not this year's Merola class, but of 2011 — skipping a year, during which he became a winner of the Metropolitan Opera National Council Auditions, and appeared in several Canadian Opera Company productions.

Continuing Adlers from the current fellows: