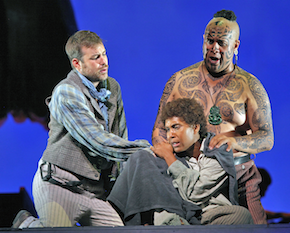 The Maoris' permanent face and body markings look like tattoos, but they are ta-moko, the skin carved with uhi (chisels), rather than punctured as in tatau. The result is grooves in the skin, whereas a tattoo can have a smooth surface (and is removable, with a lot of trouble).

Why this dermatological pondering? One of the most (of many) striking visuals in Jake Heggie's Moby-Dick, now at the San Francisco Opera, is Jonathan Lemalu's Queequeg and his rich ta-moko.

The bass baritone is a New Zealand-born Samoan, of Maori descent, but those markings are not permanent. Otherwise, he may have a problem singing Scarpia or Escamillo, although this look for Wotan could be interesting.

What you see are temporary silicone tattoo transfers, created by Gerd Mairandres, SFO wig and makeup supervisor, and his team. The application process — with water, not chisels — takes about two hours, and lasts for two performances. Which means that you may bump into Lemalu one day in or around the Hayes Street Grill, ta-moko in place.

The SFO press department also reveals the secret of Ahab's peg leg that Jay Hunter Morris wears effortlessly, at least by the look of it. The peg leg is "created from a single piece of unpainted beech wood; Morris kneels into it and it is attached to his upper thigh with straps." What the audience sees is a believable peg leg and fine balance by Morris. What would opera be without the makeup and prop wizards?